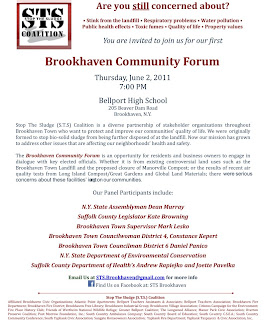 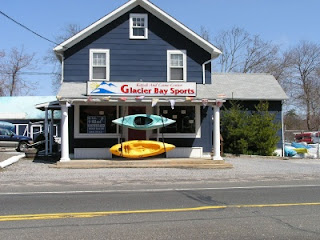 Originally published: Long Island Newsday, May 19, 2011 7:39 PM
Updated: May 19, 2011 8:28 PM
By PATRICK WHITTLE patrick.whittle@newsday.com
A Brookhaven Town-owned building that has sat vacant onMontauk Highway for about three years could be the site of a new nature center.
The town is planning a June public hearing on whether to allow a Brookhaven Hamlet man to use the facility at 2979 Montauk Hwy. in the hamlet as an environmental education center and kayak rental business. The center would provide access to the Carmans River.
Brad DeSantis would pay the town $26,100 per year to use the facility, according to documents filed at Town Hall. DeSantis also would make about $70,000 in improvements to what town officials describe as a rundown facility in need of repairs.
"The dock there has been deteriorating. It's great that we are getting someone in there," said Councilwoman Connie Kepert, who represents the area.
"It's difficult to be able to get into the Carmans down there." The town board is scheduled to vote Tuesday to set a public hearing on the contract with DeSantis. The hearing will likely be June 14, Kepert said.
The contract would allow DeSantis to manage the facility for five years with a two-year option to renew when it expires, at the town's discretion, town documents state.
The property was the site of a Glacier Bay Sports facility. The building is about the size of a medium-sized single-family home, said Parks Commissioner Ed Morris.
"They are going to offer educational-type tours of the river," he said. "It's going to offer recreational opportunities at that location and it's also going to bring revenue to the town."
The property was purchased by the town for $490,000 in June 2008. It is near the junction of the Carmans River and Great South Bay.
The Carmans River is the subject of the Carmans River Watershed Protection and Management Plan, which would attempt to preserve the river by steering new development outside of its watershed. The town is attempting to shepherd the proposal into law.
Posted by Hamlet Reporter at 9:29 AM No comments: Links to this post

Brookhaven to care for forgotten cemeteries

By PATRICK WHITTLE patrick.whittle@newsday.com
Fire Place History Club member talks about the work Brookhaven Town needs to do to maintain�abandoned 18th and 19th century cemeteries, such as Woodruff Cemetery in Brookhaven Hamlet. Videojournalist: Patrick Whittle (May 4, 2011)

Martin Van Lith stepped gingerly around the four headstones in the
Woodruff family burial plot -- an overgrown piece of Bellport woods
-- and silently read the inscription on the grave marker of Esther
Woodruff, 1775-1851.
"We have loved her on earth, May we meet her in Heaven."
Her husband's marker, however, lay broken in half. The Woodruff burial ground, and about 20 like it in Bellport and Brookhaven hamlet, have gone largely unmaintained for years. But thanks to the efforts of Van Lith and his group of local history buffs, Brookhaven Town will soon begin caring for some of the forgotten cemeteries.
Van Lith and the Fire Place History Club have for years pressured Brookhaven officials to comply with a state law that requires towns to maintain abandoned cemeteries. The ones in Bellport and Brookhaven hamlet mostly date from the 18th and 19th centuries; the number of graves in each range from two to 40, Van Lith said.
Prompted by the club's lawsuit, State Supreme Court Justice Melvyn Tanenbaum last year issued a decision requiring the town to begin maintaining nine of the burial grounds, deemed by the club as historically significant. Brookhaven is set to begin the work "within the next three weeks," said town spokesman Jack Krieger.
Van Lith said his group will assist with maintenance if the town provides access to the sites and mows lawns. Such tasks are too much for the club to undertake; many sites are overgrown with vegetation that makes them inaccessible by foot, he said.
"The average age of my group is 68," he said. "We can't do it."
Councilwoman Connie Kepert said the town will work with the club, and said the graves show the area has "enormous history that we take for granted." Town Historian Barbara Russell welcomes the help, but said the club should consult the Greenfield, Mass.-based Association for Gravestone Studies.
"It's not a matter of going to the stone and getting some glue," Russell said.
The nine cemeteries to be maintained are located south of Sunrise Highway between Wertheim National Wildlife Refuge to the east and the Bellport train station to the west.
The Woodruff ground, located off South Country Road in Bellport, is one of about a dozen abandoned cemeteries in the area not slated to be refurbished. Van Lith said he would like to see the town maintain more cemeteries, but added "it's not like we're going to ask them to refurbish every cemetery in town."
Sharon Miller, whose home abuts the tiny Woodruff cemetery, said she would like to see the site maintained. The burial plot includes the final resting places of Matthew, Stephen and Esther Woodruff and Esther's husband, Stephen Robinson -- all of whom died between 1851 and 1875.
"We would be thrilled if the town did something with this," Miller said. "It gives respect and integrity."
Posted by Hamlet Reporter at 6:08 PM No comments: Links to this post

Re: DRAFT GENERIC ENVIRONMENTAL IMPACT STATEMENT FOR DECLARATION AS SURPLUS AND SUBSEQUENT SALE OF 255 ACRES OF COUNTY OWNED LAND IN YAPHANK FOR MIXED USE DEVELOPMENT PURPOSE

Dear Members of the CEQ Board,

Let me begin by commenting that it is unclear to most in the Brookhaven hamlet community that the DGEIS for Legacy Village was still an ongoing process given all of the new developments related with this same land. To begin, it should have been tabled during the time while Brookhaven Town is undergoing a Carmans River Preservation Plan.

This week the CEQ should have put the plan aside and announced either a postponement or cancellation after the County Legislature voted to kill the Legacy Village proposal and replace it with their own plan. This is all extremely confusing to the lay people whose lives will be very much affected by the proposal.

Equally distressing is that DGEIS comments are due immediately after the report that Legacy Village’s author has been convicted of improprieties by the district attorney. It’s no wonder that public confidence in government is at an all-time low.

The Fire Place History Club, like the rest of the Brookhaven hamlet community, has been opposed to the idea of building a mini-city on 255 acres of County land in Yaphank since it was first introduced by Executive Steve Levy in 2005.

For the past 60 years, there has been an ongoing effort to protect Carmans River, beginning with the donation of 1,500 acres along the lower river by Maurice Wertheim in 1947. In 1962, New York State began a program of stream corridor protection by condemning Ken Hard’s 1,600-acre game preserve, today’s Southaven Park. In 1974, through the lobbying efforts of this community, the Carmans River was included in the NYS Wild, Scenic and Recreational Rivers Act. Since then millions of taxpayer dollars have been spent acquiring Carmans River
watershed land, the most recent last week with NYS’s purchase of 99 acres adjacent to Cathedral Pines, for $5 million.

This proposal to sell 255 acres of publically owned land for the purpose of intense development in the Carmans watershed flies in the face of 60 years of preservation efforts. It is incomprehensible to me to be addressing a DGEIS concerned with things like traffic, parking, jobs and payroll, entertainment, etc, when the whole concept of undoing past preservation efforts is absurd. This is the very land that we are spending millions of dollars to protect.

Even more distressing is the intellectual dishonesty that was used to push this ludicrous idea to this point. Throughout the County Executive’s five-year promotional period there was no mention of the existence of the adjacent Carmans River. It seems clear to me that Carmans River was intentionally omitted from all literature to avoid environmental concerns. As far as I know, there was only one exception to this general deceit, an early discarded proposal named
something like The Villages at Carmans River, which showed a diagram of a boardwalk leading from the development out to the river.

The whole process that led to this DGEIS is questionable and seems to be a sham:

The signing of contracts with a developer before the legislature voted to declare the land surplus. The plan and the contract calling for massive development on land that is not zoned by the Town for this kind of density. And using taxpayer money for the propaganda promoting the plan.

The DGEIS lists four areas, A – D. My understanding of the SEQRA law is that this is segmentation, but I’ll let others more familiar with the law address this. No matter what else comes from this plan, the FEIS should recommend that area A be transferred to the County Parks Department to become part of Southaven Park.

For the areas B, C and D there is no meaningful discussion of a preservation alternative, such as turning these areas into a nature preserve or parkland.

The Draft EIS was prepared at the same time as the Town’s Draft Carmans River Plan, where the Town’s goal is for the nitrogen level in Carmans River not to exceed .7 ppm. The Town’s plan should be considered in a revised EIS before any consideration is given to declare this land surplus for the purpose of auction.

Posted by Hamlet Reporter at 1:06 PM No comments: Links to this post

I have recently been informed that the Caithness Committee will be meeting, perhaps for the last time, in June. However, we still need a little more time to complete the restoration of one more of the six cemeteries that we had hoped to repair with the grant money.

This last cemetery is the Barteau Cemetery. The restoration work is being held up waiting for the Brookhaven Town Parks Department to open the access road leading from Montauk Highway to the Cemetery. Until this is done we cannot clear the cemetery of brush and inventory the headstones that need repair, nor can our stonemason, Hollis Warner, get his equipment into the cemetery.

I am writing to request that the Fire Place History Club’s remaining grant money, $1,685, be held until the Parks Department opens the access road to this cemetery so that the repairs can be made.

I would also like to urge you to please contact Commissioner Ed Morris asking him to make opening the access road to the Barteau cemetery his number one priority.

Thank you for your consideration of this request.

Posted by Hamlet Reporter at 12:54 PM No comments: Links to this post