Despite the Dateline of the Times article of “Quogue,” the lead inlet picture is of the new “Smith’s Inlet” on Fire Island opposite Fire Place Neck and Brookhaven Hamlet.  The later before & after picture appears to be the same region of Fire Island.  Quogue is significantly further east on Long Island.  The barrier beach there usually is no longer considered “Fire Island.”  This barrier beach is defined by Moriches inlet at the west and Shinnicock inlet at the east.

QUOGUE, N.Y. — As the president of the Fire Island Association, Suzy Goldhirsch has a message she says she often offers property owners. “We are living on a sandbar in the middle of the Atlantic Ocean,” she tells them. “We are in a high-risk environment. We on barrier islands are on the front lines of climate change.” 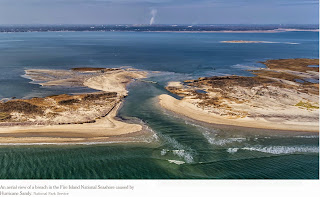 QUOGUE, N.Y. — As the president of the Fire Island Association, Suzy Goldhirsch has a message she says she often offers property owners. “We are living on a sandbar in the middle of the Atlantic Ocean,” she tells them. “We are in a high-risk environment. We on barrier islands are on the front lines of climate change.”

The same could be said of many coastal areas around the world, which are threatened by rising sea levels as the planet warms. But the barrier islands that line the Atlantic and Gulf Coasts, from Cape Cod to the Mexican border, are a special case.

A new report from the National Research Council finds that the effect of climate change is especially harsh on these islands. Population growth in much of this long coast “is nearly twice the national average,” the report said. Meanwhile, “these same coasts are subject to impact by some of the most powerful storms on earth and the destruction potential of these events is increasing due to climate change and relative sea-level rise.”

And so far, the report added, “as a compassionate nation, we rally each time a disaster strikes and provide resources for postdisaster recovery that far exceed those we are willing to provide to manage risk.”

The panel calls for a regional or even national approach to managing coastal hazards — a “proactive” effort to protect life, landscape and property, rather than the “disjointed and largely reactive approach” that has marked coastal protection efforts.

Until relatively recently, barrier islands defended themselves against rising seas by, in a sense, moving to higher ground: Storms washed beach sand to the islands’ inland side; inlets formed and healed, usually leaving sand deposits behind the islands. This process worked well, as geologists noticed after the Ash Wednesday storm in 1962, a nor’easter that battered much of the East Coast through five high tides. Afterward, they reported that beach recovery was fastest and most robust in areas with the least development.

Fire Island, Before and After Sandy

(The above is an active link online,  bar can be slid left or right)

But today, Ms. Goldhirsch said, nature can no longer be left to take its course even as sea level rises. On many barrier islands, even federally designated national seashores like Fire Island, inlets are stabilized by rock jetties, beaches are routinely renourished with sand pumped from offshore, and miles of sea walls and other armor protect buildings.

“Let nature take its course — I don’t think that’s good planning,” she said. “That’s not public policy. Public policy is you have to figure out what to do.”

With the rapid development of the past few decades, the economic stakes have escalated drastically. The research council’s report, “Reducing Coastal Risk on the East and Gulf Coasts,” says that from 1980 to 2013, the United States had 33 coastal storms that each caused more than $1 billion in damage, sometimes far more.

While those storms represented about 22 percent of all the nation’s billion-dollar-plus disasters over that period, they caused about 49 percent of the economic losses. Adjusted for inflation, losses from coastal storms have tripled since 1980.

Many losses result from storm surge, the bulge of water that storms push onshore. Even if storms do not increase in frequency or intensity, the sea level’s rising will worsen damage from storm surge, which the report calls “the most destructive aspect of a hurricane.”

Subsidies, emergency relief and ad hoc projects on the East and Gulf Coasts have encouraged development in the face of such danger, the report said. These can be “inappropriate incentives” according to the panel’s head, Richard A. Luettich Jr., a professor of marine sciences at the University of North Carolina, Chapel Hill.

The report was commissioned by the Army Corps of Engineers, which, acting on the instructions of Congress, has had a large hand in this work. Among its other projects in response to Hurricane Sandy, the corps plans a Fire Island project that would pump seven million cubic yards of sand from offshore and construct new dunes and beaches along almost 20 miles of beachfront.

Supporters argue that the project will strengthen the island and that, in turn, will protect low-lying shore communities across Great South Bay. But opponents disagree, citing assessments from the United States Geological Survey; Fire Island’s relative stability over time; and other factors. Left alone, they argue, it will eventually recover from the storm. And drawing sand from offshore deposits to build new dunes could actually harm the island, they say.

In September, the National Audubon Society won a temporary restraining order halting the project, saying that pumping sand onto the island would harm nesting sites for endangered shorebirds.

Private and publicly financed shoreline engineering projects are provoking similar arguments in places like Nantucket Island, Mass.; Harvey Cedars, on Long Beach Island, N.J.; and the Outer Banks of North Carolina. On many barrier islands, daily life becomes more complicated as sea level rises. Here in Quogue, east of Fire Island, people use caution when driving on the main beach road when the moon is full (when tides are unusually high) because that’s when salt water from Quantuck Bay can flood across the road.

On the Outer Banks, the main road washes out routinely now, whenever “the tide is high and the wind is blowing,” as some residents put it. And everywhere, people are raising their houses on pilings, sometimes 20 feet or more in the air.

Nevertheless, the expert panel said, it is hard to win support for safety measures that would require communities to “forgo revenue-generating potential by limiting development.”

Robert S. Young, the director of the Program for the Study of Developed Shorelines at Western Carolina University, said he was glad to see the expert panel emphasize the need for a long-term, large-scale, proactive approach because “managing the coast parcel by parcel is a bad idea.”

But getting such a message across will be difficult, the panel said, adding that “assessing, communicating and managing risk in coastal areas are very challenging concepts even for a committee of experts in coastal science and engineering.”

Ms. Goldhirsch said Fire Island could be a model for intelligent planning, in part because even though people would bring different interests and goals to the process, “we all love the place.”

Her family has summered on Fire Island for more than 100 years, she said, and she understands its dangers. Hers is a modest house, where she keeps no valuables.

“I tell people, ‘If you don’t have the nervous system to live in a risky situation, it’s O.K. to sell or stormproof your house, or live modestly,’ ” she said. “Don’t try to get the federal government to pay for everything. They don’t have enough money.”

A version of this article appears in print on September 30, 2014, on page D3 of the New York edition with the headline: Growing, and Growing Vulnerable. Order Reprints|Today's Paper|Subscribe

Posted by Hamlet Reporter at 5:19 PM No comments: 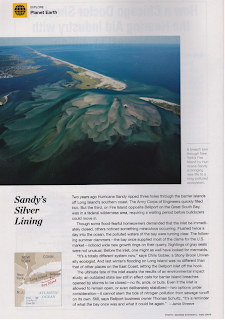 Posted by Hamlet Reporter at 11:18 PM No comments: