Tuesday morning I left MacArthur Airport on a Southwest Airline flight headed for North Carolina, flight has a traditional flight path of turning south over Carmans River. I was waiting by the window with my camera: 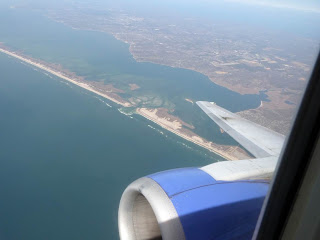 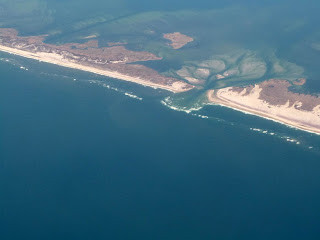 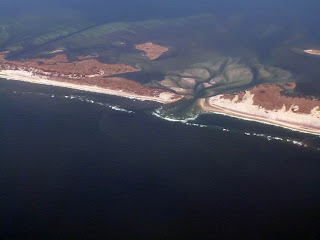 Here's the above picture with some text: 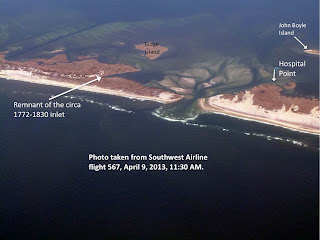 Welcome to Fire Place, four rivers run through it: 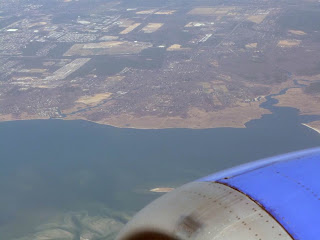 Posted by Hamlet Reporter at 11:46 AM No comments:

'Tis Spring, the bird is on the wing! Kevin of River Rd., Brookhaven NY

He's been here for the past two years, don't know who dumped him.  He stops in once a day to visit everyone on the street, never turns down an offer of food. He lets out a blast every now and then that rattles the windows. 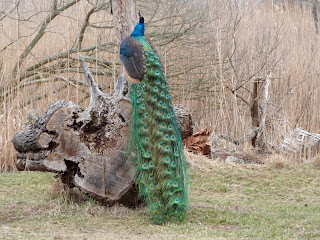 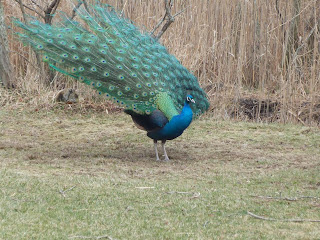 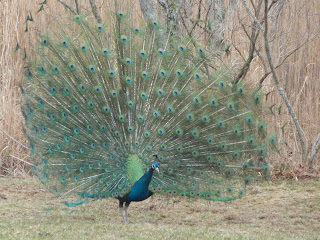 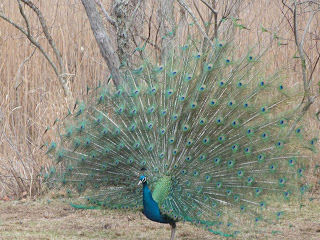 Posted by Hamlet Reporter at 4:11 PM No comments: 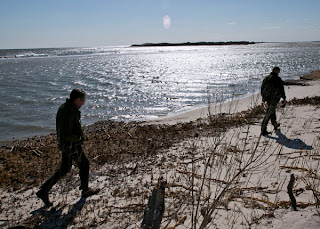 FIRE ISLAND, N.Y. — If on some stretches of this barrier island the scars of Hurricane Sandy are fading, at a spot called Old Inlet, a physical reminder of the storm remains: a channel, now 856 feet wide, through which seawater pours into the Great South Bay. The breach, in a federal wilderness area at the eastern end of the island, has already helped clean the much-compromised bay.

Now the question being debated by local residents, scientists, environmentalists and government officials is what to do about it: leave the gap as it is for the time being and see what happens, or close it up?

Among those calling for its immediate closing are residents in communities like Babylon and Lindenhurst on Long Island’s South Shore, who say that since Fire Island was breached they have faced increased flooding. Their pleas are being echoed by some elected officials, from village mayors to Senator Charles E. Schumer.

On the other side are environmental groups and other residents who see the introduction of ocean water as an opportunity to remedy decades of degradation of the Great South Bay from storm water runoff, lawn chemicals and septic leaks.

Channels have opened before in the length of this 32-mile-long island. As its name implies, Old Inlet, which is in the Fire Island High Dune Wilderness about a mile and half west of Smith Point, has provided a channel to the sea in the past. According to Charles Flagg, a marine scientist, the area was open for 60 years, until sometime in the 1820s.

“Inlets close on their own, but the timing is uncertain,” said Dr. Flagg, a research professor at the School of Marine and Atmospheric Sciences at Stony Brook University.

The National Park Service, the Army Corps of Engineers and the New York State Department of Environmental Conservation will ultimately decide the breach’s fate, having already followed a mandate not to take any action for 60 days in wilderness areas. Hurricane Sandy carved another channel through Fire Island at Smith Point County Park, and the Corps of Engineers closed that in the fall.

In mid-March, the Department of Environmental Conservation directed the Army corps to take the initial steps to prepare for filling the Old Inlet breach. The process involves dredging sand and essentially pouring it in the gap; a low steel wall may be required under the sand initially to contain the water. “This will allow expedited closure of the breach in the event that the breach does not close naturally or if the Breach Contingency Team determines closure to be necessary,” the agency said in a statement. In its decision, the agency said, the potential for improved water quality will be weighed, as will any impact on communities; it said the breach had not caused additional flooding on Long Island. Any decision, it said, will be “based on science.”

But some residents in the Long Island villages of Babylon and Lindenhurst, more than 20 miles away from the breach, say they have noticed the bay creeping up on their streets more frequently since Hurricane Sandy.

Scientists attribute increased flooding to a series of storms and unusually high tides that have affected the entire Eastern Seaboard this winter. But some residents insist that the Old Inlet breach must be partly to blame.

“It’s the common-sense experience of people looking out their windows,” said Richard Harty, a retired construction electrician in Babylon. “We’ve lived in our house 35 years on a canal off the Great South Bay. At least four times since Sandy, we’ve had heavy street flooding — even when the sun is shining.”

Dr. Flagg said he was neutral on the issue of whether the gap should be closed. “The major benefits of leaving it open are clearly water quality,” he said. “There are very few fish in the Great South Bay in general except at the inlets, and the sea grasses vanished from the eastern Great South Bay when we first moved here 25 years ago.”

“The water is already cleaner,” he continued. “It looks positively tropical. It’s blue.”

Christopher Soller, superintendent of the Fire Island National Seashore, which is managed by the National Park Service, agreed that “there is some flushing of the bay that is occurring.” But the ocean water also has a potential down side. “Will it change the nature of the bay,” he asked, “by bringing in new predators like starfish? There are trade-offs in all of this.”

Kevin McAllister, president of the Peconic Baykeeper, which is part of the national Waterkeeper Alliance, is urging officials to take advantage of the hurricane’s gift. “To close that flush off would be a colossal mistake,” he said. “Is Senator Schumer ready to spend billions of dollars on storm water infrastructure and septic remediation as opposed to leaving this open?”

Even Will Veitch, the mayor of the upscale village of Bellport, north of the inlet, has called for the breach to remain open, saying that he had seen no evidence of worsening flooding in recent months. “I think at this point it’s something that we should wait on,” he said.

But a wait-and-see approach poses its own challenges.

Joseph R. Vietri, director of the National Planning Center for Coastal and Storm Risk Management with the Army Corps of Engineers, said that as the breach had grown — it was just 276 feet wide a week after the storm — so too had the cost of plugging it. “What could have been done for a couple of million dollars is now approaching $20 million,” he said.

Environmental officials said that money might not have to be spent — there’s a chance that the breach will close on its own this summer.

Posted by Hamlet Reporter at 11:21 AM No comments: