Are these guys serious!!?  It has to be a joke. 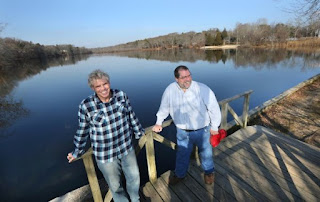 Colonial-era dams in Yaphank are causing higher water temperatures in parts of the Carmans River and should be removed or opened, environmental advocates say.

The groups Defend H2O and Sea-Run Brook Trout Coalition say the dams create thermal pollution by artificially spreading out the water and slowing it down, allowing it to collect heat. Restoring the flow would reduce temperatures, halt the spread of invasive species and return natural fish passage routes to the river, reducing the need for costly dredging and other treatments, they say.

"It's essentially being a giant solar collector," said Doug Swesty, a member of Sea-Run, a nonprofit regional group founded to protect and restore brook trout populations and coastal watersheds.

The two dams, built in the 1700s, created Upper Lake and Lower Lake and were home to successful sawmills that provided lumber to area residents and business.

Several government agencies would have to sign off on removing or breaching the dams because the Carmans River is state-designated as a "wild, scenic and recreational river"; is an important trout habitat; and is within the central pine barrens, where use and development are limited.

The two environmental groups placed temperature sensors in both

lakes between May and September, and found that water in Lower Lake

water before it traveled to the nearby Lower Lake.

"It's clearly having an effect on water temperature," Defend H2O founder and president Kevin McAllister said. "All roads lead to these impoundments."

The Carmans is one of Long Island's largest rivers. Eight of its 10 miles are freshwater, fed by groundwater from the aquifer.

Several years ago, attempts to remove the dams created an outcry among residents, prompting Town of Brookhaven officials to focus on building fish ladders and other passages to enable movement of trout and other species, said Anthony Graves, Brookhaven Town's chief environmental analyst.

"The first thing you need is community buy-in. We didn't have that," he said. "The community was dead set against the removal of the dams. They consider them to be the heart of the community."

Residents formed the Coalition to Save the Yaphank Lakes and continue

to advocate for keeping the dams in place because of their historical significance.

In conjunction with the Yaphank Historical Society, they also petitioned to have

said Robert Kessler, who is president of both groups and lives along one of the lakes.

"Yaphank grew up between the two lakes. They drew people to Yaphank from all over," he said. "The dams are not coming down. That is not happening."

Because the Carmans is a certified trout spawning river, state law prohibits thermal discharges above 70 degrees into the water body, Swesty and McAllister said.

During the summer, they documented water temperatures above 70 degrees in Lower Lake, beneath the first dam.

"We are going to push the issue," McAllister said.

Jomo A. Miller, however, said the regulation does not apply

to "water flowing over an existing dam," but to discharges from

human activity, such as sewage treatment plants or industrial operations.

Both dams are considered low hazard and are inspected as needed, Miller said. Some deficiencies were found in Upper Lake's dam when it last was inspected, in May 2009, but no formal violations were filed. Lower Lake's inspection was in October 2011.

Invasive species — such as cabomba, a weed — have infested the two water bodies. Brookhaven Town's plans to dredge Lower Lake were postponed in 2014 after cost overruns and delays. A year earlier, the project was canceled because Upper Lake dredging flushed too much sediment into the water, turning it cloudy and violating a DEC permit, Graves said.

"Those invasive species don't do well in a free-flowing river," he acknowledged.

Nationally, removing dams has grown in popularity as a means of restoring wetlands and reducing the need to dredge or treat for invasive species every few years.

"Dams are like any infrastructure," said Amy Kober, senior communications director for American Rivers, a nonprofit conservation group based in Washington, D.C. "Any time they age, they need what may be costly repairs. They can also outlive their usefulness."

An estimated 1,185 dams from California to Maine have been removed since 1936, with 72 taken down in 2014, according to American Rivers.

"The wonderful thing about rivers is they're so resilient," Kober said. "They can really come back to life pretty quickly."

DEC recommends dam owners inspect their impoundments every three months and after big storm events. Design guidelines revised in 1989 say trees and brush are not permitted because they can hide sinkholes, animal burrows and other stability threats.

"Trees eventually die and their roots decay and rot," the DEC said on its website. "The root cavity leaves a void within the dam through which water can enter and flow."

At the Upper Lake dam, trees and brush cover the slope of the structure, while branches, leaves and other debris are in the river bed. Steel bars have been installed across the width of the opening, appearing to shore up the concrete walls.

At Lower Lake, wire fencing obscures much of the dam, which is bordered by crumbling sidewalks and plant and tree growth.

"Just from the standpoint of crumbling infrastructure, something is going to have to be done pretty soon," Swesty said.

The 2013 Carmans River Conservation and Management Plan recommended that the integrity of Lower Lake's dam be evaluated, and if rebuilding is decided, a manufactured fish passage should be considered.

A fish passage for Upper Lake dam also was recommended. Funding is approved for a new spillway and fish passage, and should happen next year if permits are approved, Graves said.

Posted by Hamlet Reporter at 11:39 AM No comments:

To Whom It May Concern:

As many of you have probably seen, the proposal to construct solar arrays on wooded, public land in Yaphank and Bellport has been getting a lot of attention the past few weeks. While the Bellone administration has yet to submit a contract for approval to the legislature, this is expected in early 2016, Legislator Browning has introduced two resolutions that are before the Ways and Means Committee next Thursday, December 10 at 12:30pm in Hauppauge. Your support for these resolutions is appreciated. Anyone from the public can speaks for 3 minutes during the public portion.

IR 1926-15 was tabled at the last committee. The resolution would effectively prevent the administration from moving forward with drafting a contract until the Legislature took action to approved the plan.

IR 2014-15 is a new resolution that seeks to create a Master Plan for the Yaphank County Center, and places a moratorium on any projects for the area until that plan is in place.

The County owns hundreds of acres of land in Yaphank which were acquired decades ago to accommodate the future expansion of County offices and operations. In recent years, as it has become apparent that the County will not need to use the entirety of its Yaphank holdings to house government offices, so numerous uses for the property have been proposed. The prior County administration proposed the enormous mixed use “Legacy Village” at Yaphank, which was ultimately rejected. Some of the Yaphank property was dedicated to parkland in 2011, and another 2011 resolution (Resolution No. 298-2011) declared 247 acres of property as surplus and directed the Division of Real Property, Acquisition and Management to offer the land for sale or lease to maximize the monetary return to the County. In 2013 the County sold 230 acres of the Yaphank property to Oakland Transportation Holdings for the purpose of establishing a rail transfer station. The latest proposal at Yaphank would allow a private entity (Solar City) to clear dozens of acres of woodland to allow for the installation of solar arrays for a minimum term of twenty (20) years.

The County has no cohesive or cogent plan to guide the use and management of its Yaphank holdings, and has instead pursued a piecemeal and scattershot approach. IR 2014 would convene a committee, comprised of experts in planning, advocates for the environment and members of the local community, to determine the best way to utilize the Yaphank land.

Your presence and support next Thursday is greatly needed and appreciated.

Posted by Hamlet Reporter at 7:09 PM No comments: 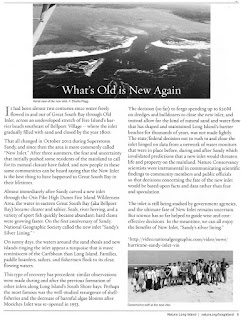 Posted by Hamlet Reporter at 10:46 AM No comments: