The following is interesting because of the size of the reward that was offered.  John Rose must have been a very frugal man.
The Corrector (Sag Harbor), August 29, 1846, p. 3.
1 CENT REWARD---Run away from subscriber, on the 14th inst, an indentured boy, aged 15, by the name of Augustus Stevens.  Whoever will return said boy shall receive the above reward, and all persons are hereby forbid harboring or trusting said boy,
JOHN S. ROSE.
Fireplace, Brookhaven, Aug. 18th, 1846
Posted by John at 10:47 PM No comments:

Work has started on the South Haven Church Cemetery!

Our stone mason, Hollis Warner of Riverhead, has straightened things out with the Town of Brookhaven and is ready to go -- but he is going on vacation next week, probably won't start until the week after, about April 27. In the meantime, community folks will need to excavate, clean and mark the location of the stones.  If you are interested, contact Marty Van Lith, vanlith@optonline.net,

Hollis also has to get back to the Town with a cost estimate of Carmans/Miller and Azel Hawkins burying grounds, the other two sites he's contracted to do by December 31.

Dian Martens and Betty Taylor Budney, probing for fragments
As a youth, Betty lived two houses from the cemetery.

Eben Ludlow, uncovering what at first appeared to be a buried headstone
but  when excavated contained no text. 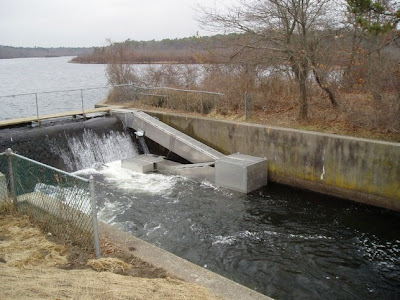 Alewife are anadromous fish; they spend most of their lives in the ocean, but return to fresh water to spawn.  An important food fish, bait fish, and favorite prey of striped bass, their runs are said to have been declining along the Atlantic coast partly due to construction of barriers on spawning tributaries. To combat the declining number of alewife and other native fish, the New York State Department of Transportation (NYSDOT) has constructed on the Carmans River Long Island’s first permanent fish ladder.

The fish ladder is said to permit fish to move upstream beyond a previously impassable barrier into Hards Lake in South Haven County Park, connecting two now isolated parts of this South Shore Estuary. Alewife and sea-run brook trout (a.k.a. "salters") now have access to spawning areas above the Hards Lake Dam. The Carmans River, which flows from Middle Island in the north to Bellport Bay in the south, holds the largest remaining population of brook trout on Long Island.

The barrier dam at South Haven is not new, at least on a human scale.  A mill dam was first constructed there in the early 18th century.  Several other early mill dams remain along the river, including two former mill dams at Yaphank and smaller weir dams built by various tenants principally to enhance fishing.  Since the early 19th century, brook trout has been farmed in fish hatcheries for the stocking of the river.  One can still visit a hatchery originally built by the Hards for their Suffolk Game Farm (see Suffolk Club & "Fireplace" Hard Estate) and I believe still maintained by Suffolk County.

Probably the most famous story of fishing on the river from the early 19th century concerns Daniel Webster.  The river was very popular among well-heeled sportsmen.  A huge trout had become legendary and Webster was determined to catch it.  One Sunday, during services at the South Haven Presbyterian Church, one of Carman’s servants slipped in and whispered to Webster that the fish had been seen in the pond below the dam. Webster and Samuel Carman (owner of the dam, mills and surrounding land) sneaked out.  Other congregants got the message and began to leave.  The minister, seeing the hopelessness of continuing, ended his sermon and the whole congregation watched Webster catch the fourteen-and-a-half pound trout. The much celebrated trout lives on as a wooden replica on the weather vein of the church even today.  The event was also memorialized in a Currier & Ives print.  It is still said to have been among the largest brook trout ever caught.

A native South Haven resident, who was a young girl in the early 1930s, 200 years after the original mill dam was constructed, remembers the alewife runs as being enormous.  They would come up the river and pool at the pond below the dam.  They would be so dense that they would jump out of the river onto the shore.  She remembers collecting them in baskets and wheelbarrows, and her mother would use them as fertilizer in the garden.  She remembers that they were also smoked for human consumption, but were not to her taste.

I have visited the area below the South Haven dam many times, and have never noticed the alewives.  This will be the first year that it has been in place during the Spring run.  I'm sure someone will be keeping track of its effectiveness.

And maybe someone will explain to me how the little buggers know that climbing the ladder can be a good thing.

Residents of our communities will have the opportunity to attend a wonderful and unique concert on Saturday, April 4th. The concert "Opera, Organ and More" is being presented by the Becker/Gambles Music Fund Committee of the South Country Education Foundation, Inc. The concert will be held at the historic Old South Haven Presbyterian Church in Brookhaven Hamlet (at the intersection of South Country Road and Beaver Dam Road across from the Bellport High School) at 5:00 p.m. The Church dates back to 1828 and, in addition to its architectural elegance, holds the wonderful story of Senator Daniel Webster sneaking out of a service to catch the famous 14 ½ pound trout in the nearby pond, a replica of which can be seen as the weathervane on the Church spire. The Church now is the home of the Hinners Organ which was built in 1913 for a church in Sayville, and had several homes prior to being installed in the Old South Haven Church in 1961. In 2006, the organ was fully renovated by the Odell Organ Company thanks to a bequest by a former member of the choir, Roger Kickerer. The organ will be played at the concert by Robert Price who holds his Masters degree from the Mannes College of Music. He has been employed as an organist for over twenty years, and holds the prestigious certification by the American Guild of Organists.

The concert’s vocal portion will be provided by local artist Michael Douglas Jones, bass, and Mihaela Buhaiciuc, soprano, a native of Romania who currently teaches voice at the University of Mobile, Alabama. Mr. Jones and Ms. Buhaiciuc will sing both art song solos and duets, including a duet from Don Giovanni by Mozart and from Don Pasquale by Donizetti. Michael Douglas Jones made his New York City debut in Madame Butterfly, and has sung many operatic roles for several opera companies including those in Victoria B.C., Anchorage, Sarasota, El Paso, and Montreal. Mr. Jones won the prestigious Jessie Award for "outstanding performance by an actor in a leading role" for his creation of the Marquis in 120 Songs for the Marquis de Sade by Hannan. Ms. Buhaiciuc graduated Summa cum laude from the Brasov Music Conservatory in Romania and holds a PhD from Stony Brook University. In September 2008, Ms. Buhaiciuc gave a solo concert at the Weill Recital Hall at Carnegie Hall. In addition to concertizing, she is active in music education outreach programs, including giving Master Classes at the South Country Schools and the Port Jefferson Schools.

Mr. Jones and Ms Buhaiciuc will be accompanied by Leon Livshin who studied at the Moscow Tchaikovsky Conservatory before coming to the U.S. on a full scholarship to study piano at the Eastman School of Music in Rochester, NY. He has an active soloist and chamber music schedule, and teaches at Stony Brook University.

Tickets for this concert will be available at the door for $20. Proceeds will go to the Becker/Gambles Music Fund to support summer music scholarships for students in the South Country Schools. In addition to wonderful music, you have the opportunity to dine at The Bellport which is offering concert attendees a prix fixe dinner for $22 (For dinner reservations, please call 286 7550.) 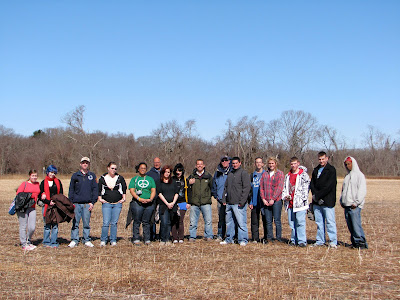 On Tuesday, March 31, 2009, students from the Bellport High School, accompanied by their teachers/advisors Andrew Budris and Dennis Pluth, were led on a "historical" tour of the Wertheim National Wildlife Refuge and the Robinson Farm (now owned by Suffolk County).  The tour was let by Marty Van Lith, Brookhaven Village Association historian and Fire Place History Club convenor.  He was assisted by Jen Clements.
They first visited the  David Hawkins family burying ground off Old Barto Road on the old Hawkins farm.  They then continued hiking south on the Old Barto Road [picture], across the Long Island Railroad tracks to a Refuge road along the south side of the tracks to the old Homan farm road, then back north across the tracks to a trail east to the southeast field of the Robinson farm.
After crossing the field, they visited the Carman/Miller family burying ground where Samual Carman, Sr. and family members are interred [picture].
Afterwards they visited the old South Haven Presbyterian Church cemetery where John Deitz, and elder of the church and a member of the Fire Place History Club, talked of some of the people buried there [picture].
They then finished the tour at the former Hard estate/Robinson barn, where the current owner, Ron Bush, gave a tour of his extensive collection of old farm equipment [picture].
Posted by John at 10:49 AM No comments: