The 11-page report, released this week by Farmingdale-based Citizens Campaign for the Environment, is based on dozens of town and state documents obtained by the group through Freedom of Information requests. The report concludes that "data that has been reviewed . . . does not support that Brookhaven is doing any due diligence to protect surface water and streams."

Brookhaven officials Tuesday defended their monitoring program and said the report was "replete with errors."

Citizens Campaign executive director Adrienne Esposito said the $10,000 report was prepared on behalf of the Brookhaven Community Coalition, an umbrella group of civic organizations representing residents living near the 192-acre landfill. The town accepts construction and demolition debris and ash at the facility, which brings in net revenue of $30 million a year, town officials said.

Residents have long complained of foul stenches from the landfill and expressed concerns about a plume that runs beneath the community.

"Air quality is a very big deal to the community," Esposito said in an interview on Monday. "They just need to know, and they deserve to know."

The report was prepared by Consulting for Health, Air, Nature and a Greener Environment, or CHANGE, an environmental consultant in upstate Queensbury. Chief executive Timothy R. McAuley said efforts to find documents outlining the town's monitoring program were unsuccessful.

Town officials yesterday criticized the report, saying CHANGE officials did not visit the landfill or discuss their concerns with the town.

"I think it would be very helpful to have an exchange," Supervisor Edward P. Romaine said in an interview. "I think we all want to have a landfill with less risk."

Waste management commissioner Matt Miner said the town monitors air and water quality and pays the state $104,000 for an environmental engineer to monitor the site.

Brookhaven resident Dave Wahlfeld, who lives about a mile from the landfill, said he hopes the report spurs officials to address the community's concerns. "There's just times when the smell is just horrible, burns your throat," he said.

Posted by Hamlet Reporter at 11:40 PM No comments: 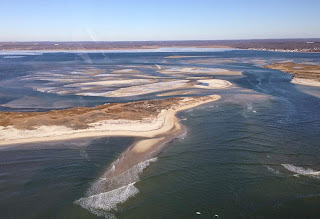 An interesting aerial photo on Stony Brook University's School of Marine and Atmospheric Sciences website, taken by a John Vahey on Jan 17, 2015, showing the inlet with the frozen Carmans River in the background.
Posted by Hamlet Reporter at 4:24 PM No comments:

Like a Phoenix rising from the ashes, Smith’s Inlet is back with us. Reopened during Superstorm Sandy after 175 years of lying dormant, Smith’s Inlet is Old Inlet’s original name, located directly south of Brookhaven hamlet on Fire Island about a mile west of Smith’s Point County Park.

Since its first recorded existence, Smith’s Inlet has had a long and fascinating history. During the early 1770s, shortly before the American Revolution, a storm created the inlet though Judge William Tangier Smith’s manorial property on Fire Island. Some early maps called it New Inlet or South Inlet as well as Smith's Inlet; other early maps had no name for it. However, in 1834, the New York State Legislature passed a law “to preserve the grass on a part of the south beach” and used the phrase “heretofore known and designated as Smith’s Inlet,” indicating that the inlet was already known by the name “Smith’s Inlet” at the time the law was passed.

This early inlet was both a blessing and a curse. A blessing for fishing and commercial vessels in the settlement of Fire Place, the colonial name of Bellport, Brookhaven and South Haven. A curse once the war started and the British blockaded the inlet, using it to supply their troops. They built Fort St. George adjacent to Judge Smith’s home across from the inlet to guard it. (The Tangier Smith’s Manor of St. George is a museum today and is open to the public.)  During the War of 1812, the British once again blockaded Smith’s Inlet, and it is said there were many skirmishes there. When Smith’s Inlet first opened it may have been a mile or two east of where it ended some 60 years later (inlets move westward over time). In an 1827 storm, a Spanish ship loaded with millstones sank in the channel of the inlet. Then another ship, the Syracuse, loaded with a cargo of salt, became entangled with it and sank. Over the years sand built up around the hulks, and by 1836, the inlet was essentially closed to sailing vessels.  The area where Smith’s Inlet was then became known as Old Inlet.

In 1912, a group of local residents formed a membership corporation and purchased 3.2 acres about three quarters of a mile to the east of the remnant of the closed inlet (still there) and SSW of Carmans River, directly south of Mott Lane in Brookhaven hamlet. They then formed the Old Inlet Beach Club and built a boardwalk, pavilion and bathing houses. In 1959, another beach club, the Fire Place Beach Club, was formed and purchased 1.2 acres adjacent to the Old Inlet Club.

In 1964, federal legislation was passed creating the Fire Island National Seashore, and the land of these two clubs was condemned and acquired. FINS let the Old Inlet Beach Club dock and boardwalk remain, and used the name Old Inlet to designate a free dock and access to the ocean beach. In 1980, the Old Inlet area became part of the National Seashore's Otis Pike Wilderness Area.

It is interesting to note that section 8 (b) of the federal legislation that created the National Seashore strongly recommended the construction of an inlet across Fire Island. One of the few benefits of Superstorm Sandy was to provide the funding and construction for this desired inlet, unfortunately washing away the Old Inlet boardwalk and dock in the process.

Concerns about the inlet causing flooding on the mainland have since been laid to rest, and we are now in awe of the beneficial things that have resulted from the inlet’s reopening. It is an astonishingly beautiful natural inlet fitting for a Wilderness Area.

But I urge caution to Squassux Landing boaters and bathers. Smith’s Inlet is a wilderness inlet, wild as a beast. Just remember that on Nov. 5, 1813, its first iteration killed eleven of our Fire Place fishermen.