FW: The BCC is back in action

Brookhaven – the Brookhaven Community Coalition today released a letter to the NYS DEC and Suffolk County calling the use of four incinerator boxes used to burn brush from Superstorm Sandy, a decision that was indifferent to the protection of public health.  The DEC and Suffolk County agreed to locate four “Air Curtain Destructors” (ACD) at the Brookhaven landfill after Superstorm Sandy which were used to burn trees, brush and vegetated debris. BCC raised numerous concerns with the DEC, the County and Brookhaven Town. Unfortunately, these concerns were largely ignored.

Two ACDs were also being used at Floyd Bennett Field in Brooklyn.  However, at this location, the EPA set up 8 air quality monitors around the debris burning units.  In contrast,  Brookhaven residents were not provided a single monitor at the start of the burning. After being contacted by CCE, Suffolk County place 3 monitors south of the wood burners to measure particulate matter.  A foil request revealed air emissions were significantly over health standards for particulate matter on several days.  The same results were found in Brooklyn.   “Suffolk County wanted a quick, cheap and easy way to get rid of the debris.  Tragically, cheap, easy and quick doesn’t mean safe,” said Adrienne Esposito, Executive Director of Citizens Campaign for the Environment. “These devices should more appropriately be named air quality destroyers.”

“We could smell and taste the ash.  We don’t really need the data to tell us our health was put at risk but at least it verifies to DEC and to Suffolk County that they were negligent in protecting our communities,” said Kathleen Lacey, Brookhaven Community Executive Board.

The DEC special permit to use these Air Curtain Destructors ended on Feb 12th and Brookhaven Town Supervisor refused to allow it to be renewed even as other towns and the county pressured him to do so.  “Thank goodness Supervisor Romaine stopped the poisoning of the public,” Esposito added.

“This is just one more environmental and public health assault on our communities, said Marty Van Lith, BCC Executive Board member, “The County and the DEC had to know that putting 4 of these units at the landfill would create high levels of ash, but they didn’t seem to care.”

Posted by Hamlet Reporter at 10:10 AM No comments:

It occurs to me that it has probably been a while since you've been updated on the progress of the BCC. I assure you that even though the press has been fairly quiet, and we have not held a community meeting in about 3 months, the BCC executive committee has been VERY busy with our two main battle fronts: the Town Landfill and Long Island Compost.

As you know, the DEC revoked Long Island Compost's variance to operate an unenclosed facility after we insisted they comply with the terms of their operating permit. Neither the Town nor the DEC had been enforcing a majority of the terms, and they had a history of ignoring neighborhood complaints. It has now been a year and a half since the permit was revoked, and yet LIC continues to operate as if nothing had happened, at least it would appear so to the public.

And yet--things have happened. The executive committee of the BCC has met numerous times over the last 1 1/2 years with Town officials, elected officials, the LIC owners and the DEC. Progress has been frustratingly slow, but after lengthy negotiations and threats of lawsuits, it appears we are very close to an agreement between the BCC, LIC and the DEC to bring the compost facility fully into compliance with their permit. This is a huge victory for us, and for the community, which has suffered overly long from odors, dust, air and goundwater contamination, noise, and other nuisances from LIC. We hope to see a fully enclosed facility, with paved roads to cut down on dust, and a host of other improvements which we will keep you informed of. It is too soon to be too specific, but we are cautiously optimistic.

As for the landfill, we still have all of the issues that plagued us before the Superstorm (except the dumping of sludge which, thanks to you, we were successful at stopping) and now, in the wake of the storm, the problem of how to dispose of storm debris in a way that will not create ill-effects on the community. Despite evidence that burning the vegetative debris in the 4 Air Curtain Destructors that were placed at the landfill would produce smoke and ash that would be not only bothersome but unhealthy, the decision was made to place the incinerators there, as they claimed having no other viable options to deal with such huge volumes of debris. It was only at the Executive Committee's insistence that 3 air monitors were placed in the vicinity, 2 at the landfill itself, and one at the Brookhaven Fire Department. We wanted more -- at Floyd Bennet Field, where they used one or two incinerators (the number is not clear)and had 8 monitors. Those monitors showed the ash and particulate matter to exceed acceptable levels, and the incinerators were shut down. Soon after, the permit to burn at Brookhaven was allowed to expire, and the burning has stopped there also. The BCC foiled the results collected from our 3 monitors 2 months ago, and just received those results last week. The reports are difficult to read, and there is an abundance of information, but the bottom line is that the reports show that there were many periods of time when the air quality was at an unacceptable level. You may have read in the paper that preliminary studies showed acceptable results, but that is only if you average out all the reports. What it doesn't show are the unacceptably high levels that occurred many times over the 2 months the incinerators were in use. We were breathing then too, weren't we? To us it is appalling what they will justify and call acceptable, all in the name of money and politics.

I made the comparison to measuring wave heights on the ocean. Average wave heights over a year may be only 8 feet, but the average does not show the 50 foot tsunami that wiped out an entire city, or cities. You just don't want to be there when that tsunami comes, just like you don't want to be here when the landfill or LIC is operating and polluting our air, which has gone on and on, not for days or weeks or months, but for years and years. More importantly THIS "tsunami" could have been prevented! We begged them not to use the incinerators and our pleas were ignored.

So, that brings us to now. Tomorrow is the first Landfill Liaison Committee meeting with Romaine since he became Town Supervisor. This meeting should tell us a lot about what we can expect from this administration in the way of cooperation, communication and compliance. Our goals are to set up a timeline and a specific plan for closure and capping of the landfill, to make sure the landfill is operated in compliance with its permits (which prohibit nuisance to the community), and to turn our heads toward the future. Start increasing recycling; set up a "pay to throw" program, as is being done successfully all over the country; find a way to reduce our waste stream. This has been an exhausting process for the Executive Committee, and I know that many of you are impatient and eager to see real results. We believe we are getting there, not as fast as we would ideally like, maybe, but progress IS being made, and I am proud of the people I work with to make this happen and of the community which has shown such concern and support.

We will plan to call another public meeting soon, and I hope you all will come. Meanwhile continue to call the DEC odor hotline with complaints when you have them. 444-0380. It makes a difference.

Talk to you soon. Pass this on.

Posted by Hamlet Reporter at 4:15 PM No comments:

Den and I have a tradition of hiking Fire Island somewhere around our birthdays .  We've been doing this since 1968. We were a little late this year, probably because we're a little older than when we started. The Fire Island we knew is no longer there, most of the island now looks like a sand bar. 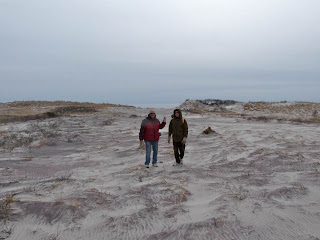 This is where the boardwalk and Old Inlet beach used to be: 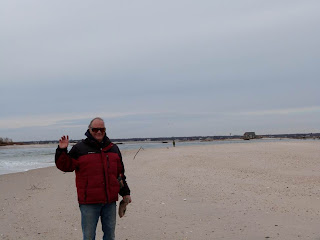 It's been nearly 200 years since a ship went through Old Inlet. Wonder if this trawler might give it a try? 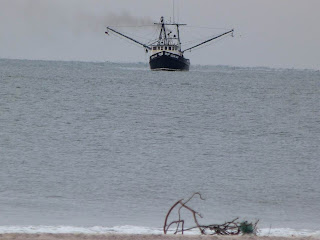 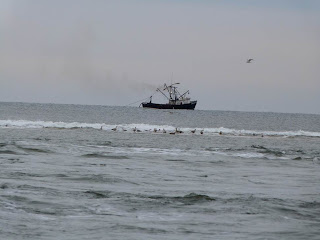 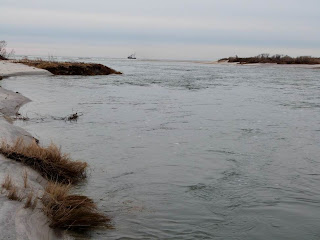 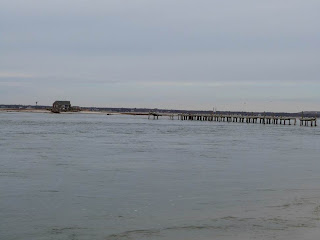 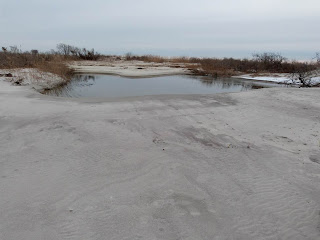 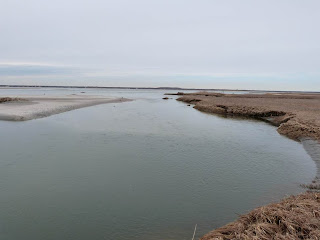 Most of the pine, cedar and cherry trees looked very dead: 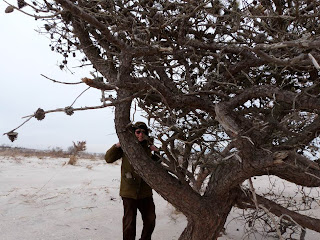 The wetlands on the bay side seem to have survived very well: 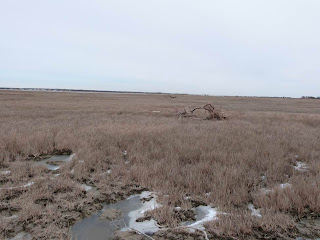 Posted by Hamlet Reporter at 11:44 AM No comments: 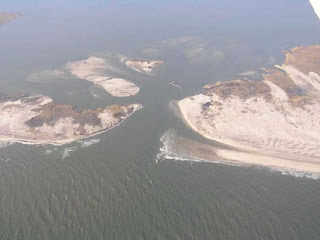 Photo credit: Handout, Stony Brook University | Aerial photo of the breach at the Otis Pike High Dunes Wildneress at the Fire Island National Seashore. (Jan. 6, 2013)
In just a few hours, Sandy seems to have done what many years of effort and many millions of dollars couldn't: jump-start a healthier Great South Bay.
This unexpected dividend from the superstorm's devastation is a breach of Fire Island that has created a new path for fresh ocean water to flush out the polluted waters of the eastern bay, an area plagued by red and brown tides. The Army Corps of Engineers, which has already closed the two larger cuts in the barrier island, is prepared to close the one in the part of the Fire Island National Seashore known as the Otis Pike High Dune Wilderness.
That would be a mistake. Let nature take its course.
Charles N. Flagg of Stony Brook University's School of Marine and Atmospheric Sciences has been monitoring the breach from the air. Flagg estimates that at its widest, the breach is 150 meters -- about the length of 1 1/2 football fields -- and that's pretty small, compared to the established and manually maintained inlets at Fire Island and Moriches. More important, Flagg and others have determined that the salinity of the Great South Bay has risen from the influx of ocean water -- and that means more oxygen and fewer pollutants. This benefits shellfish, fin fish and the growth of dune grass. Local fishing boat operators are reporting a cleaner bay.

[Reports of Flagg's Great South Bay project may be found here.  His January 30, 2013 report on the new inlet may be found here.]
Flagg has been watching the tides, too. Other than high tide arriving about 18-20 minutes earlier along the interior shoreline, there seem to be few other changes. It's even possible that the breach might act as an escape valve when high winds send more water into the bay.
A decision to wait and monitor the breach's impact is not without some risks. But in the three months since Sandy, there has been no increased flooding to the low-lying coastal communities such as the Moriches and Mastic Beach. So, as the Nature Conservancy advises the National Park Service, "There is no need to hastily react as if it were an emergency." Besides, estimates are that it would cost about $6 million to close the opening -- that's money that can be put to more immediate restoration needs along the coastline.
Action to close the two larger breaches began 48 hours after Sandy under the 1996 New York State Breach Contingency Plans developed by the Army Corps, the National Park Service and the stateDepartment of Environmental Conservation. The parks service and DEC Commissioner Joseph Martens are taking a wait-and-see approach on the wilderness breach. That's the wise choice.
The breach, which is considered stable, is being closely monitored. In time, months or years, migrating sand will fill it. If it gets larger and the threat of flooding increases, that's when man, not nature should act.