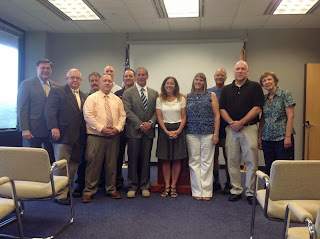 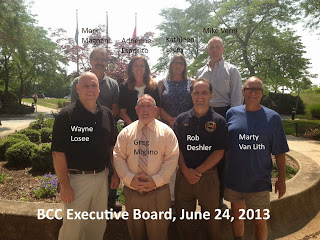 Posted by Hamlet Reporter at 12:07 PM No comments:

All BCC Coalition Members and Supporters

As many of you may know, the BCC Executive Board has worked tirelessly and aggressively for 2 years to resolve the many concerns at the Long Island Compost.  We are delighted to provide you with the significant end results that we are very hopeful will address the concerns and improve our quality of life for all Brookhaven residents.

On Monday, a critical announcement will be made -  a stipulation agreement to settle the DEC action rescinding the variance allowing Long island Compost to operate an open air transfer station has been agreed upon. Normally this process would happened in private between Long Island Compost (LIC) and the DEC with the assistance of an Administrative Law Judge.  An agreement would be worked out or a judgment would be imposed by the Administrative Law Judge. Due to BCC efforts, this time things went dramatically different.

Since the DEC announced they were rescinding LIC’s variance, in October 2011, the BCC executive board has been very busy. We have traveled twice to Albany to meet with DEC officials, department heads, and our state representatives. We put together a huge packet of information, community testimonies, maps and letters written by adversely impacted residents and sent it to the administrative law judge handling the case. We had countless meetings with, DEC Region One Director, Peter Scully and his staff. We had a number of meetings with Charles Vigliotta.

We toured the LIC facility with DEC and elected officials and their staff members. We have spent hundreds of hours studying every law, regulation and judgment, from DEC permits to the clean air act. We have spent even more time researching everything from anaerobic digesters, other technologies and  to how manganese gets into the ground water from composting processes.  We have met with numerous elected officials from Supervisor Ed Romaine to Charles Schumers chief of staff.  Citizens Campaign for the Environment allocated a great deal of resources to this campaign.

We even, traveled with Charles Vigliotti to see a compost facility in Massachusetts, in an effort to gain on the ground information for odor control measures. While on this trip. we met a very knowledgeable consultant who was utilized by the Massachusetts facility. We advised DEC that this national consultant should be hired by LIC to figure out the best way to deal with all the issues. Peter Scully agreed and LIC hired him. He conducted an extensive odor and dust study which culminated in a presentation to BCC executive board, DEC, town officials, and representatives from our elected officials.

Based on those findings, input from BCC, CCE, and directives from DEC, a stipulation agreement was drawn up and in an unprecedented move LIC allowed BCC to review the agreement and make recommendations which we did.

On Monday June 24 the stipulation will be made public. We view the dramatic changes that will take place over the next two years as a huge victory because a number of issues that are not associated with the transfer station are being addressed and the way compost is processed on LI may be changed for the better by this agreement. Please understand, we don't anticipate that all odors will be gone however, we do believe our quality of life will be dramatically improved. We are hopeful for the future. Thank you to everyone who stuck with us and supported the BCC is these efforts.

Please feel free to join us Monday at 10:00 am at town hall for the announcement.   (outside on the lawn!)

Posted by Hamlet Reporter at 9:29 AM No comments:

Years of complaints about odors, dust and noise at a compost and mulch facility in Yaphank are set to be addressed by an unprecedented agreement Monday that would enclose and seal off large portions of the operation.

Long Island Compost has reached an agreement with the state Department of Environmental Conservation and citizens groups to invest tens of millions of dollars in the new facility.

The plan includes construction of an anaerobic digester on Long Island Compost's 62-acre facility to seal off the dust, odors and noise of the composting operation that neighbors have complained about for more than a decade.

Trucks coming and going at the Horseblock Road facility would be air-locked to prevent odors and material from escaping. The facility also would have an enclosed tipping operation and bagging facility, and roads will be paved to eliminate dust.

The agreement includes new limits on the amount of mulch stored at the facility, a major source of odor complaints. Mulch on site would be limited to 15,000 cubic yards, down from totals that have risen to as high as 150,000 cubic yards.

"It's a landmark agreement that will change the way organic waste is managed on Long Island," said Adrienne Esposito, executive director of Citizens Campaign for the Environment, an environmental group, who helped broker the agreement. "It sets a new precedent for community involvement and managing compost and mulch."

She worked with the Brookhaven Community Coalition, a group of 30 family members and local activists, on the push for changes. The process was "challenging, emotional and grueling," Esposito said.

Kathleen Lacey, an executive board member of the Brookhaven Community Coalition, who lives about a mile from the facility, said, "I have very high hopes that it will work this time. We've been extremely diligent for over two years on this project. This agreement forces them to actually change the way they're doing things."

DEC Region One director Peter A. Scully called the agreement historic. "Recycling of organic materials is a critically important part of successful efforts to manage solid waste on Long Island, and sound operating practices will ensure that these activities can take place without significant impacts to the community," he said.

Since it moved to Yaphank from a facility in East Moriches more than a decade ago, Long Island Compost has won plaudits for its ability to turn leaves, grass and other organic waste into compost and mulch -- and sell it at a profit. But almost from the beginning it has elicited complaints from neighbors.

The new agreement would settle a filing by the DEC in October of 2011 that sought to revoke Long Island Compost's variance to operate a yard-waste facility without a structure, based on years of odor complaints.

For Long Island Compost, the agreement comes with another benefit: methane gas produced from the new digester will be used to fuel Long Island Compost trucks and other mechanical operations. Producing its own energy not only will mean big cost savings, but will allow the facility to sharply cut back on noise and greenhouse gases.

Charles Vigliotti, president and CEO of Long Island Compost, called the changes a "complete re-engineering of the company's process, looking with fresh eyes at how organic waste is handled."

The company will spend upward of $50 million on the modernization of its operations, he said, but will save money on fuel, power and other efficiencies while reducing its carbon footprint.

"It's a game changer for how waste is handled for Long Island," Vigliotti said.

The state DEC in 2009 launched an investigation of Long Island Compost's Horseblock Road facility after elevated levels of heavy metals and radionuclides were found in ground water samples in and around it. Manganese levels also far exceeded drinking water levels.

The department, with the Suffolk County Department of Health Services, undertook tests of scores of wells at 12 ground water sample dozen organic waste and related facilities in Suffolk -- from Islip to Southampton. Others, including a mulching facility on Main Street in Yaphank, also showed elevated levels.

A report on the Horseblock Road investigation is due this summer.

Ed Warner, the manager of Long Island Compost in Yaphank, stands on top of a large pile of compost.