Brookhaven Town officials and residents have demanded that the Long Island Rail Road restore trees that were cut along train tracks in Brookhaven hamlet and East Patchogue.

LIRR officials said in a statement that the trees were removed earlier this year along the Montauk branch as a safety precaution.

"Literally thousands of trees" were cut down along about five miles of track and the LIRR did not notify town or state officials, or residents, he said.

But town officials and state Sen. Lee Zeldin (R-Shirley), said during a Tuesday news conference in Brookhaven hamlet, that they believed the LIRR cut down far more trees than necessary. Some felled trees were more than 20 feet from the tracks, Supervisor Edward P. Romaine said.

"They overreached," Romaine said of LIRR officials. "We understand clearing . . . for trains and commuters, but they cleared to the property line."

Romaine said residents called Town Hall to complain they had lost their privacy and noise buffers. "We began to get more and more calls," he said. "We looked and we said, 'They don't have to clear this.' "

Zeldin said in a statement that the LIRR should "find a way to strike a balance that satisfies all parties."

LIRR officials said in the statement that the railroad would consider the request to restore trees, adding that workers would survey the area "to review any potential safety issues."

Denise Tripodi, who lives along the tracks in Brookhaven hamlet, said the trees were removed without prior notification about two months ago. Workers wore orange vests with no indication that they were affiliated with the LIRR, she said.

She said the LIRR should erect fences and restore the trees.

The LIRR statement said trees are periodically trimmed or removed to "maintain proper visibility for engineers to safely operate trains, to reduce 'slip-slide' conditions from falling leaves that can cause trains to miss stops, and to keep communications and signal lines clear."

Posted by Hamlet Reporter at 10:52 AM No comments: 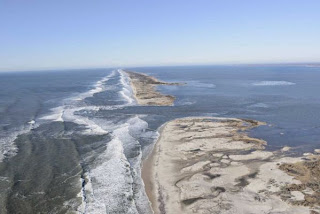 A view of the breach caused by Superstorm Sandy on Fire Island, looking west on March 9, 2013. (Credit: Doug Kuntz)
The Fire Island breaches created by Sandy were not to blame for flooding in surrounding coastal communities in the months after the superstorm hit, according to a U.S. Geological Survey study.
The study by three USGS scientists, published earlier this month, determined that post-Sandy flooding along the South Shore was instead caused by a series of harsh winter storms that hit the battered area.
"The high water levels that occurred in five months following Hurricane Sandy in these back-barrier bays were caused by winter storms, not by barrier island breaching or geomorphic changes in the bays caused by Sandy," the study concluded.
Sandy cut three breaches into Fire Island. One in Smith Point County Park and another in Cupsogue Beach County Park have been closed by the Army Corps of Engineers. The breach at Old Inlet remains open.
Charles Flagg, a professor at Stony Brook University's School of Marine and Atmospheric Sciences, has been studying the Old Inlet breach and said the USGS findings are in line with his research.
"The flooding would have happened regardless, and it was happening throughout this whole region," Flagg said.
Rather than harming the coast, the Old Inlet breach, which allows ocean water into Bellport Bay, has led to an improvement in water quality and clarity there, he said.
"If you're over at the breach on an incoming tide, it looks like the tropics," Flagg said of water in the bay. "Just clear and sparkly."
Flagg said the breach appears to have remained stable, neither widening nor deepening, since February 2013.
"It's wiggled around. It's changed shape. But the size of the opening does not seem to have changed," he said.
The Fire Island National Seashore is currently studying different approaches to the breach, including closing it, artificially keeping it open, or doing nothing. The breach sits within a federally designated wilderness area.
Suffolk County Executive Steve Bellone, prompted by concerns about flooding in the months after Sandy, had asked the state Department of Environmental Conservation to close the breach in the months after Sandy hit in October 2012.
Bellone said Wednesday that he was glad to have scientific evidence that the breach did not contribute to floods.
"To the extent that we can see real scientific data, that's important for us," he said. "With respect to flooding, our priority remains protecting public health and safety."
Flagg said such breaches naturally form and disappear, although it is unclear when the Old Inlet breach might close if left in a natural state.
Joseph Gagliano, co-chairman of the Bellport Village Waterfront Commission, said he supports leaving the breach in the hands of nature.
"This breach that we now call Bellport Inlet, there's nothing new about it. It's happened before," Gagliano said.
Instead, "the focus should be to replenish Fire Island as our barrier beach to protect the mainland," he said.

Posted by Hamlet Reporter at 9:28 AM No comments:

Posted by Hamlet Reporter at 6:36 PM No comments:

Elise Brown (Hugh Brown's daughter) is selling her dad's house and having an estate sale on Saturday, 5/24/14, 9am-4pm @ 301 Beaver Dam Road.  You may wonder why this warrants an email???  All proceeds will go to the Brookhaven Village Association Virginia Brown Scholarship fund. I will be putting the info on the BVA website and I am hoping word of mouth will help also.  Please spread the word.

Posted by Hamlet Reporter at 10:19 AM No comments: