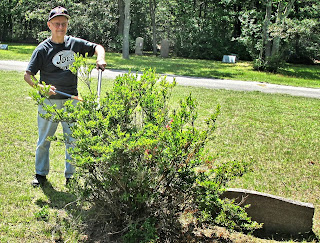 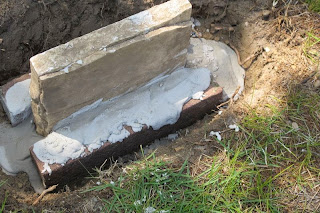 Brookhaven hamlet is blessed with many volunteers.  A recent trip to the Oaklawn cemetery discovered 88 year old Bob Brown working quietly away. 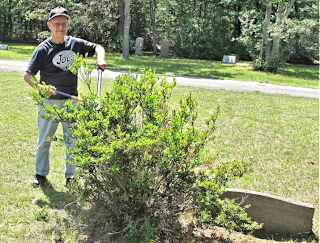 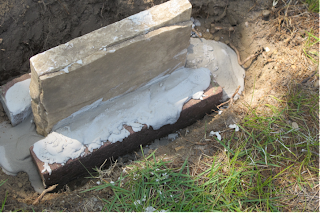 Posted by Hamlet Reporter at 11:50 AM No comments: 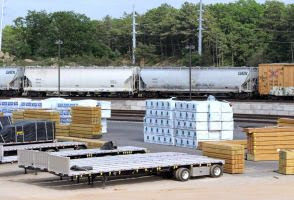 There was an article in this morning’s Newsday about a garbage transportation crisis on Long Island.

Omni Recycling of Babylon can’t find enough trucks to get the garbage off Long Island.

Why can’t they find enough trucks?

Well, it’s because of the success of the Brookhaven Rail Terminal.

After puzzling over their problem for a while, they came up with a solution:

Load the garbage onto railroad cars instead.

So they are proposing loading the garbage into railcars “at a rail spur for freight.”

Progressive Waste Solutions, which handles garbage from Southold and East Hampton Towns, says its transfer station in Yaphank is filled to capacity.

Then there was this follow-up story this evening.  (See below.)

Another firm involved is Eastern Resources Recycling of 88 Old Dock Rd, Yaphank.  (That’s where a body of a 42-year-old Rocky Point man was found in the trash in August 2012, two days after his birthday.)

Although the DEC seems to be open to a plan to use railcars, there is disagreement regarding what location to use to load the garbage onto the cars.

(I guess it will have to be someone near the overflowing transfer stations, like the one in Yaphank.)

In choosing a site, they have to recognize that:

. . . the looming LIRR strike is a factor because it would effectively shut down all but the Brookhaven rail terminal, carters and rail sources say.

Even though this crisis developed just a couple of days before Independence Day – what unfortunate timing – and thus requires an immediate emergency decision, the DEC did not allow itself to be pressured into saying Brookhaven Rail can move the garbage.

I’m pretty sure they are using trucks.

I guess you need a different kind of truck to get off Long Island than the kind of truck used to move the garbage from East Hampton to Yaphank.

Then all that garbage wouldn’t be piling up on Long Island.  It would pile up in New Jersey instead.

No pact on garbage removal plan

Efforts to resolve a garbage stockpile before the long weekend failed Thursday after agreement could not be reached on a site from which the trash could be loaded on to railcars to leave Long Island.

That standoff means the piles of trash will continue to grow. In the towns of Southold and East Hampton alone, more than 900 tons of garbage is likely to be generated for collection and transportation this weekend -- a peak tourist time, carting industry sources say.

As a proposed quick fix to take it off the Island using sealed railcars awaits emergency authorization from the state, the governor's office intervened Thursday, scheduling a conference call Monday morning involving all the parties -- representatives from the affected garbage collection and management firms, the state Department of Environmental Conservation and New York & Atlantic Railway, the Long Island rail freight franchisee.

New York & Atlantic has concerns over selection of an appropriate rail-truck depot site at which to load the garbage onto railcars.

An MTA-owned Hicksville transfer station in Nassau that could take 10 railcars' worth of garbage a day off the Island, but requires all the waste to be trucked to Nassau.

A passing track adjacent to the Long Island Rail Road commuter train station in Yaphank where New York & Atlantic could provide at least a dozen cars a day.

A privately owned rail spur in Medford, but sources said negotiations had yet to begin with that land owner.

This last option -- a facility that provides distance from the main LIRR track and is in an industrial area away from residences -- is under a cloud after allegations by the Town of Brookhaven that its operators are illegally mining sand from an adjacent property on to which they hope to expand their facility.

"The New York & Atlantic Railway has only recently become involved and we're working with a number of partners to try to clarify the best options," he said by phone from Chicago.

"A specific loading site has to be confirmed and that may wind up being a privately-owned site if it's shown that's the best site to handle the volume expeditiously," he said.

While the garbage companies say a private site would cost more to remove the backlog, time is of the essence because it's estimated it could take a month to clear the current stockpile. In addition, the looming LIRR strike is a factor because it would effectively shut down all but the Brookhaven rail terminal, carters and rail sources say.

The garbage -- estimated at between 10,000 to 12,000 tons as of Thursday -- is stockpiling at town transfer stations on the East End and at several collection and transfer facilities in Suffolk, including two owned and operated by Progressive Waste Solutions, a publicly-owned Canadian company.

A spokesman for Progressive on Long Island, said he was hopeful of a breakthrough next week, but declined further comment.

Emily DeSantis, spokeswoman for the state DEC -- which regulates garbage -- said in an emailed statement: "DEC is actively working to help find a solution to the backlog of waste on eastern Long Island."

Michael White, attorney for Omni Recycling of Babylon, which is coordinating the effort on behalf of the affected garbage management firms, was disappointed at the failure to reach a decision Thursday. "This is an unfortunate delay, coming as it is over a peak garbage-generating weekend on the East End, but I'm optimistic an agreement can be reached," he said.

State environmental law and regulations hold the generator of solid waste responsible for its proper disposal. But if the waste en route passes into ownership of a permitted interim facility, those facilities assume the legal responsibility. That puts the onus in this crisis on Progressive and Omni, as well as Yaphank-based Eastern Resource, also a transfer station operator on the East End.

The three firms had until recently used a network of flatbed-trucking companies to haul their baled garbage off the Island. Representatives of both Progressive and Omni said Thursday they continued to work to make use of available trucking firms, but a dearth of flatbeds -- caused in large part by the success of the BRT operation in Yaphank -- meant there remained insufficient long-haul trucks available on Long Island to clear the mounting garbage backlog.

Toll increases on metro-area bridges have increased the price of road freight to the Island dramatically in recent years -- and owing to the damage they make to roads, trucks crossing onto the Island are limited to 80,000 pounds of weight unless they get special dispensation from the state transportation department.

A U.S. Department of Transportation matrix estimates one railcar can move roughly the equivalent amount of freight as four 18-wheelers.

Posted by Hamlet Reporter at 9:18 AM No comments: