A [Brookhaven Hamlet] Postcard From 1912 Returns to Brooklyn 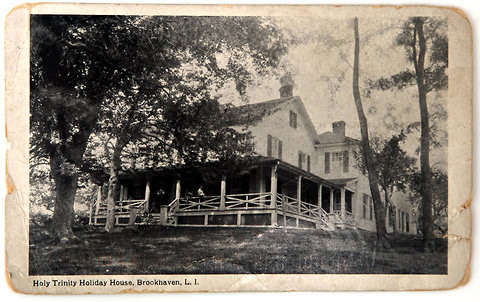 A post card of the Trinity Holiday House in Brookhaven Hamlet, mailed in 1912 to Brooklyn, was recently received by the current residents at the Brooklyn address.
Story as it was published in the New York Times.
The Trinity Holiday House was one of the many summer hotels/guest houses that could be found along the south shore of Long Island, including Brookhaven Hamlet, in the late 19th and early 20th centuries. This particular guest house was owned and operated by the Church of the Holy Trinity in Brooklyn Heights as a vacation destination for mothers and children.
The "Miss E.F. Iggulden" of the 1912 post card described in the New York Times article was of little doubt Elizabeth F. Iggulden, a daughter of Charles and Anna C. Iggulden. As noted in the NYT article, they appeared at the address in the 1910 census. Charles was a jobber carpenter; Anna was a dressmaker who worked at home. Charles and Anna were of English decent who immigrated in about 1895. In 1910, they had had six children, of which only three were still living.
I have a post card of the Holiday House dated June 15, 1910 from a D. G. Marshall to "Miss A. Iggulden" posted to the same Brooklyn address. Its salutation is "Dear Alice," and she is no doubt Elizabeth's older sister, born about 1895.
Posted by Hamlet Reporter at 10:28 AM