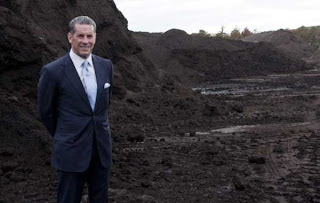 Photo credit: Randee Daddona | Charles Vigliotti, chief executive of Long Island Compost stands in front of a mountain of compost on company grounds in Yaphank. His company is providing the compost for trees being planted at the 9/11 Memorial. (Oct. 29, 2010)

An agreement to slash intake of grass clippings to Long IslandCompost in Yaphank will hopefully address years of neighborhood complaints about the odor from the site, officials said Tuesday.

State Sen. Lee Zeldin and Assemb. Dean Murray announced they reached an agreement with operators of LI Compost to reduce by 90 percent the intake of grass clippings, a main source of stench during decomposition.

"There obviously have been a lot of groups and community residents who have been very concerned about the odor, and this responsiveness is the next step in reducing the complaints," said Zeldin (R-Shirley).

Neighbors of the compost site have complained of stench and dust emanating from the facility, as well as from the nearby BrookhavenTown landfill.

"It's great to show that they are willing to work with us and the community, and try to be good neighbors," said Murray (R-East Patchogue). "This is a step for them to move their business in a different direction."

The compost site will no longer accept 35,000 tons of grass clippings shipped from another Long Island town, which LI Compost president Charles Vigliotti declined to identify. "It was a voluntary act on our part, recognizing that there was some legitimate concerns," Vigliotti said.

He expects revenue loss of more than $1 million a year, though the 62-acre facility will continue to accept a "small" amount of clippings from local landscapers. "It's a recognition that we want to be good neighbors," Vigliotti said.

Local environmentalist Adrienne Esposito, who is a member of the landfill-focused BrookhavenCommunity Coalition and has called for enclosing the open-air compost site, said it is an important but small step in the right direction.

"While it's good news, it's far from what we need to rectify the problem," Esposito said. "The problem is inundation of odors and dust and nuisance issues and public health issues."

She said mulch and decomposing yard waste are also sources of odor; and completely enclosing the compost site is the best way to combat the impact on surrounding neighborhoods.

Vigliotti said the rest of the LI Compost operations were not affected.

"We're here to stay," he said. "We perform a critical environmental and quasi-municipal function, but we do recognize the fact that ours is an industrial operation and you have to be forever cognizant of the impacts."

The site's last scheduled delivery of grass clippings is Saturday.

Posted by Hamlet Reporter at 11:05 AM