South shore Brookhaven, Yaphank and Medford hamlets continue to to subsidize wealthy North Shore  communities by enduring stench and broken promises!   Is it perhaps time to split the town in two-- North Brookhaven (AKA the Gold Coast) and South Brookhaven? 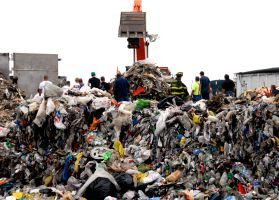 Brookhaven Town’s landfill in Yaphank, long criticized by neighbors as smelly and unsightly, might grow yet higher.
Brookhaven’s waste management Commissioner Matt Miner intends to ask the state for permission to add 50 feet to the landfill’s height, a move that would extend its life span by three years.
Making the landfill taller will generate millions more in revenue for the financially strapped town, Miner told the town board at Thursday’s work session.
“The landfill is already 270” feet tall, he said. “So going up another 50 feet is nominal.”
With the state’s permission, the landfill could be 320 feet tall, hold an additional 3.9 million cubic yards of waste, and generate an additional $120 million in net revenue for the town, Miner said.
Town Supervisor Mark Lesko said the landfill — while it “will close at some point” — is “a regional asset when it comes to being self-sustaining in terms of managing our waste.”
The landfill is in the district represented by Councilwoman Connie Kepert, who noted her constituents “have been promised that the life of the landfill will end,” she said. “There has to be an end to the burden.”
Miner said he also will ask the state to modify the town’s permit from the Department of Environmental Conservation that allows Brookhaven to accept a maximum of 1 million tons of waste per year.
During the height of the recession in 2008, Miner said landfill business declined and the town did not meet the maximum intake — so he wants a 10 percent increase for the next three years to make up for the revenue loss without exceeding state regulations.
The additional 100,000 tons per year will bring in an additional $2 million to $3 million in revenue each year, he said.
Pending the state’s approval, the town board will vote on the landfill changes at the May 8 board meeting. The landfill is a major source of income for Brookhaven, making up about 40 percent of the town’s revenue for its $260 million budget. Lesko has projected that the town could face a budget gap of $6 million to $10 million in 2013.
Posted by Hamlet Reporter at 3:28 PM