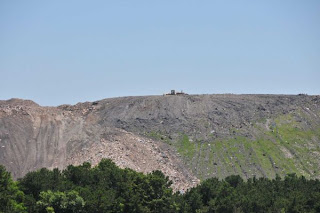 A community group formed to help Brookhaven decide the future of the town landfill has filed a claim in state court to stop the town from expanding the Yaphank facility by 50 feet.

A lawyer for the Brookhaven Community Coalition filed the Article 78 claim, which is used to appeal decisions made by governing bodies, in Suffolk County Supreme Court on Friday.

"We are extremely hopeful that this will stop the unnecessary height expansion of the landfill and get the town to understand they need to begin a process for closing it in ten years," said coalition member Adrienne Esposito. "No more dumping on lower Brookhaven."

The Article 78 accuses the town of failing to follow state environmental law when town board members adopted a resolution in May to amend a 2002 environmental impact statement, which described the landfill's environmental effects on the surrounding communities at its current height of 270 feet.

Hoping to someday ask the state Department of Environmental Conservation for permission to expand the landfill by 50 feet, the town argued that the 2002 findings would be also relevant for a higher landfill of 320 feet and amended the 2002 environmental statement to include the new height and lengthen the time the landfill stays in business.

The struggling town earns $45 million in yearly revenue from the landfill. Failure to expand could lead to higher property taxes or layoffs, town Supervisor Mark Lesko has said. The expansion could earn the town another $2 million a year.

But coalition members, who have met several times with Lesko and the town board to discuss alternatives to expansion, say town officials are not listening. Filers of the challenge want the May resolution annulled, thus preventing the town from seeking DEC permission to build the landfill higher.

Michael Mulcahy, a Bellport resident who is a named party to the claim, said he was tired of hearing about expansion plans from Lesko. "I just think they're just trying to push this through fast and they know they're in the wrong," Mulcahy said of the town board. "That's why I signed this thing." 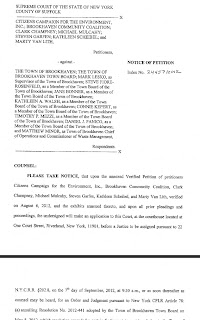 Posted by Hamlet Reporter at 12:04 PM