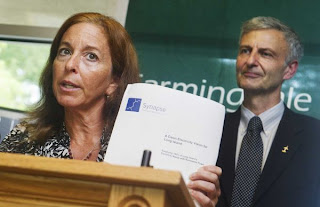 Photo credit: Amanda Voisard | Adrienne Esposito, executive director of Citizens Campaign for the Environment, speaks during a press conference to announce the results of the Long Island Clean Electricity Vision study that was commissioned by Renewable Energy Long Island (reLI) and environmental, public interest and other advocacy organizations at Farmingdale State College. (Sept. 04, 2012)

A group formed to provide community input on the management of the Brookhaven Town landfill has asked the state to yank its permission for the Yaphank facility's operation.

Lawyers for the Brookhaven Community Coalition sent a letter dated Oct. 19 to the state Department of Environmental Conservation, asking that the town's permit to operate the landfill be suspended based on "the failure of the Town to comply with the terms and conditions of the permit."

Adrienne Esposito, a member of the coalition and executive director of Citizens Campaign for the Environment, said the landfill is "run very sloppily" and fails to meet regulations about proper record-keeping, maximum height and containment of dirt and debris.

"This is the warning shot for the landfill," she said. "We put the town and the DEC on notice that the landfill has to be run within the regulations."

Brookhaven officials did not respond to a request for comment Friday.

"DEC has received the petition and takes all such petitions very seriously," DEC citizen participation specialist Aphrodite Montalvo said. "The issues raised are currently being reviewed by DEC staff."

Esposito said the violations include the system that is supposed to contain contamination.

"It broke down more often than it worked correctly. It needs to be fixed," she said, referring to clogging in the system and failures of the pumps and motors. "The leachate system needs to be upgraded."

In August the coalition filed a claim in state court to prevent Brookhaven from seeking expansion permits to grow the landfill 50 feet higher. The landfill generates more than $40 million a year for the cash-strapped town.

The letter to the DEC notes that the landfill appears to be "exceeding" the current permit's maximum height of 270 feet, based on "visual observations."

Esposito said she hopes the coalition's latest action will spur the town to operate the landfill more responsibly and avoid a potential lawsuit to close the landfill.

Posted by Hamlet Reporter at 9:24 AM