Steve Baloney : "We need to close the breach." 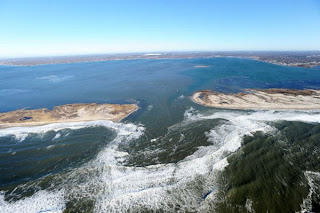 "We've seen flooding in places we've never seen before...," Bellone said in a news conference at Shorefront Park in Patchogue. "We need to close the breach."

Yet Bellone acknowledged there were differing opinions about if the breach was causing flooding.

"I'm not concerned with the debate," he said. "I'm concerned about residents along the South Shore. If the breach is contributing one iota to that suffering it needs to be closed now."

Environmentalists say the flooding is a symptom of higher sea levels along the East Coast and that the breach is not causing widespread flooding in communities along the Great South Bay.

"We have been having flooding but it's not because of the breach," said Carl P. LoBue, senior marine scientist at The Nature Conservancy on Long Island. "If it was causing flooding, we wouldn't be in opposition" to closing it.

LoBue cited "some fear mongering that's causing people to make hasty decisions that won't solve the problem," and said money spent on closing the breach could be applied to shoreline hardening projects, such as raising houses.

Newsday reported Monday that the cut in the barrier island had grown dramatically since the storm hit Oct. 29.

The northern end of the breach was 276 feet wide when the opening was first measured at the beginning of November and had grown to 616 feet wide by the end of February, the latest numbers available.

The southern opening into the Atlantic Ocean measured 108 feet wide in early November and was 1,171 feet wide by the end of February. It grew by 558 feet between Feb. 20 and 28, according to data provided by the Fire Island National Seashore.

The Oct. 29 storm cut the barrier island in three places. The Army Corps closed the breaches near Smith Point County Park in Shirleyand Cupsogue Beach County Park in Westhampton. The National Seashore opted to keep open the third breach, which was located in a wilderness area near a site called Old Inlet. Officials with the National Seashore, which is overseen by the National Park Service, decided to monitor the breach to see if it closes on its own.

If officials decide to close the breach, the state Department of Environmental Conservation would have to ask the Army Corps to do the work and the National Seashore would have to issue a permit. Late last week, DEC officials said they continued to monitor the breach and had not asked for it to be closed.

Seashore spokeswoman Paula Valentine said the park would grant the permit if the state makes the request.

Posted by Hamlet Reporter at 7:16 PM