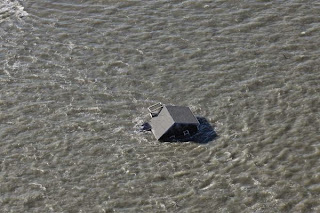 The Pattersquash Gunners Association is debating its future after the historic hunting group's clubhouse washed into Bellport Bay in the March nor'easter. (March 9, 2013) (Credit: Doug Kuntz)

The Pattersquash Gunners Association, which lost its historic Pelican Island clubhouse to a nor'easter in February 2013, hopes to start building a new cabin this fall, officials said.

"It's going to be a little bit smaller, but we want it to look exactly like it did before. . . . It's going to look like we picked it up and put it back exactly where it was," said Pattersquash president Frank Miller.

The replica of the duck hunters' 1920s-era clubhouse will be built on Quanch Island, a couple of miles west of the original location, he said.

The modest two-bedroom shack was swept off its pilings and washed into Bellport Bay by stormwaters that barreled through the Fire Island breach that superstorm Sandy carved in October 2012.

"The only trace of the club that's left on the island is the osprey nest" the duck hunters built, Miller said.

The club, with about 60 members, hopes to finish building the new shack next spring. This is the third time the group will rebuild its clubhouse.

The new shack will cost about $40,000. The members raised that sum from donations and a fundraiser held Thursday night at the Bellport Country Club that drew more than 300 people, Miller said.

"It's quite obvious by the amount of support we had last night, people don't want to lose their heritage," he said.

Only residents of the Town of Brookhaven can join the club, and Brookhaven is leasing Quanch Island for the new cabin, said Edward P. Romaine, town supervisor.

Saluting the group's historic role, he said, "The cabin serves as a safe, warm haven during the winter hunting months."

The state Department of Environmental Conservation has reviewed the group's plans and requested minor modifications.

Posted by Hamlet Reporter at 10:44 AM