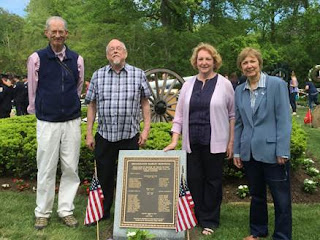 Brookhaven, NY – On Memorial Day this past Monday, May 25, the Brookhaven Hamlet community held its annual ceremony at the Fireplace Road Neck Rd. memorial to honor the brave men and women who paid the ultimate sacrifice for our Country. The memorial specifically acknowledges the local soldiers that resided in the area and served our Country. For the first time, with the assistance of a grant from Legislator Kate Browning (WF-Shirley), the site included a plaque commemorating the local heroes from the Revolutionary War, War of 1812, Civil War and the Spanish American War.

Brookhaven Hamlet and its surrounding communities have a rich history dating back before America’s Independence, and its residents throughout history played an important role in securing and preserving America’s freedom. That is why the local Fireplace History Club reached out to Legislator Browning in 2014 to help include local heroes from wars that were not yet recognized at the memorial site. Fire Place History Club Chair Martin Van Lith and Tom Williams from the Post Morrow Foundation inquired about County funding, and Legislator Browning was able to secure a $5,000 grant to pay for the creation and placement of the bronze plaque. John Deitz conducted all the research for the plaque that includes 45 individuals that answered the call to duty during America’s first four wars.

“Suffolk County, and in particular Brookhaven Hamlet, played a vital role in our nation’s independence,” stated Legislator Kate Browning. “Since the American Revolution Brookhaven residents have continued to serve and protect America and its values. It is critical that we recognize all of those individuals, and I am happy to have assisted in ensuring that all the men and women that answered our Country’s call are recognized for their contributions.”

Posted by Hamlet Reporter at 7:42 PM