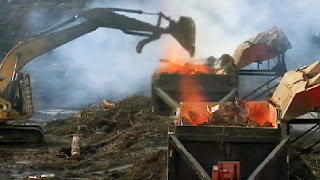 Debris from Sandy is raising a possible health concern on Long Island, where the material is being burned and setting off worries that residents are breathing in unsafe air. Greg Cergol reports.

Residents living around a 500-acre landfill in Suffolk County have demanded an end to the burning of downed trees and branches from Sandy.

According to lifelong Yaphank resident Kathleen Scheibel, a foul stench and falling ash have plagued her neighborhood a mile and a quarter from the landfill since the burning began last month.

"It's a wood-burning smell tinged with garbage," Scheibel said. "The other day, I was driving home and I thought it was snowing. To think we're breathing this in -- it's hard to swallow."

Four so-called fire boxes have been burning storm debris 24 hours a day since early November, according to Brookhaven town officials. The debris is being trucked to the landfill from Brookhaven and at least four other towns as part of an emergency plan implemented by the town, Suffolk County and New York's Department of Environmental Conservation.

But according to activist Adrienne Esposito of the Citizens Campaign for the Environment, the plan has sickened some and put everyone in the surrounding communities at risk.

"We don't want to solve the debris problem by creating a public health threat," said Esposito.

In response to the community's concerns, Suffolk county has installed three air monitoring systems around the landfill.

"Since we have begun the monitoring, particulate levels are well below the allowable limit," said a spokesperson for Suffolk County Executive Steve Bellone.

Brookhaven's new town supervisor is monitoring the air quality findings and deciding whether to halt the burning. According to Edward Romaine, the burning began before he took office last month.

"I know we have a problem with debris, but the public's health and safety comes first," said Romaine.

Romaine has ordered that other Long Island towns halt the transfer of storm debris to the Brookhaven landfill. Stopping the burning could create a bigger regional problem: Trucking the debris off Long Island would be very expensive, Romaine said. Mulching or chipping the debris could take decades.

In fact, the supervisor said, Brookhaven has only just completed the mulching of debris from Hurricane Gloria, 27 years ago.

Posted by Hamlet Reporter at 9:48 AM

The area itself sounds plagued now, by the ever lasting smell of absolute gross stench profusely being produced from burning debris. Disgusting. How does the city not understand how detrimental this is to the people?