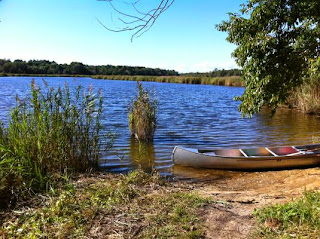 Photo credit: Carl Corry | A view from Indian Landing in the Carmans River in Shirley. The stop-off, now part of the Wertheim National Widllife Refuge, once served as a meeting place for native Americans. (Sept. 09, 2012)

Residents questioned some details of the Carmans River Conservation and Management Plan during an informational meeting at Town Hall on Thursday. But they said the proposal -- which the town board is expected to vote on in the fall -- is better than a plan that was withdrawn last year because it lacked support.

"I think it's an improvement over the last one," said Jim Gleason, vice president of the East Moriches Property Owners Association. He was among about 20 people who attended the informational meeting in Farmingville.

"I think it's a step in the right direction," Gleason said. "I don't think the last one was ready for prime time the way it was put together."

The new plan, backed by Supervisor Edward P. Romaine, calls for the town to purchase vacant private land and impose new zoning to restrict development along the 10-mile river.

A key element of the proposal is state legislation expanding the protected Central Pine Barrens region to include 3,875 acres along the river; the bill is awaiting approval by Gov. Andrew M. Cuomo.

The previous plan, proposed by then-Supervisor Mark Lesko, was criticized by residents and officials for allowing high-intensity development elsewhere in exchange for conserving the river. Lesko withdrew the resolution last year.

A public hearing on Romaine's plan is scheduled for 5 p.m. Tuesday at Town Hall.

Romaine, in remarks on Thursday, said he will ask the town board to accept written comments about the plan through August. Another public hearing will be held in September or October, and the board will vote before Election Day in November, he said.

Preserving the river is "absolutely critical" for conservation of the Great South and Moriches bays, Romaine said. "I don't think anyone wants to see Brookhaven overdeveloped," he said.

Richard Amper, executive director of the Long Island Pine Barrens Society, attended the meeting and warned that development would increase "tenfold" if the plan is not adopted.

Andrea Spilka, of Eastport, said she was "cautiously optimistic" after hearing town planners describe the proposal. She said it is a "big improvement" over the previous one.

"I was pleased to hear more about the process [and] that there will be another public hearing prior to the approval of the final version," she said.

Posted by Hamlet Reporter at 9:24 AM

One of the problems with this article, typical of Newsday's reporting under their Cablevision ownership, is that there is almost no clue as to the substance of the proposal.