Sad Day for the indigent and for Yaphank and Brookhaven hamlets

It is always dangerous to make predictions.  But I think there is a very high probability the Suffolk County Legislature will rue the day they made these decisions to sell the Suffolk County skilled nursing facility and the 230 acres of pristine wild lands.

∙ The Suffolk County home was one of the jewels of the county–something all county residents could be truly proud of.

∙ As reported in this blog, the owners/operators of the Brookhaven rail terminal (BRT), are perhaps the shadiest enterprise ever to have set foot in the county.  And this in a county that has had many shady operators..  It is hard to understand the business logic of locating a rail terminal in the Town of Brookhaven on eastern Long Island (from a rail transport perspective near the end of the world).  It is hard to understand how truck traffic on Long Island will be reduced.  While eastbound truck traffic may be reduced, most of what is rail shipped to Yaphank will have to be transshipped by truck west to Nassau County and NYC.  Where is the reduction in truck traffic there?  Even though the BRT folks have indicated (tongue-in-cheek?) that they are not especially interested in shipping garbage, now with some 300-400 acres under their control (all apparently not subject to any local jurisdictions or control – neither Brookhaven Town, Suffolk County or New York State – it seems inevitable that it will become the regional collection point for the transshipment of garbage off Long Island.  It is said that the BRT will be the largest rail transshipment operation in the United States.

The BRT will either become a huge white elephant headache for Suffolk County and the Town of Brookhaven, or a colossal raping of the Long Island environment including the Carman’s river and our drinking water aquifer.  And in either eventuality, destroy the  hamlet of Yaphank.  All for a relatively small pot of gold.  What were our elected officials thinking?  One can’t help but speculate that someone is on the take –another long-time Long Island tradition. 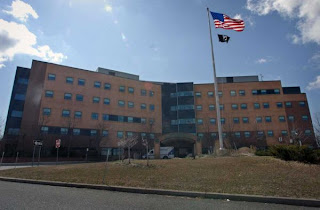 Legislators also voted 16-2 to approve the $20 million sale of a county parcel in Yaphank for expansion of a rail hub. "Today we took a $43 million step toward balancing Suffolk County's budget," Deputy County Executive Jon Schneider said after the votes.

The 10-7 vote for the nursing home sale came after aides to County Executive Steve Bellone warned that a delay or rejection of the sale would force the administration to present a budget next week that would close the complex by year's end and lay off its 200 employees. The administration also warned lawmakers that if they chose to keep Foley open, a property tax increase of at least 12 percent would be necessary next year.

Backers said the sale will keep the nursing home in operation and its 190 residents in place.

"I'm going to vote to sell because I'd rather not close it and put the people in this room on the unemployment line," Louis D'Amaro (D-North Babylon) said of the crowd, which included many nursing home workers.

But Dan Farrell, president of the Association of Municipal Employees representing nursing home workers, called the vote "pure politics. The county executive put pressure on all of them."

Farrell vowed to challenge the sale in court, claiming that 12 votes are needed to approve the sale and that the sale process was flawed. County and legislative attorneys say only 10 votes are needed. Legis. Edward Romaine (R-Center Moriches), whose wife works at Foley, recused himself from voting.

The vote came after a nearly 21/2 hour debate and a half-hour recess during which the Democratic majority huddled privately with Bellone's chief deputy Regina Calcaterra and county attorney Dennis Cohen.

Earlier in the day, lawmakers had listened to more than 70 people who spoke about the nursing home and the proposed sale of 230 acres in Yaphank to expand a freight rail hub.

Patricia Foley Kuhn, daughter of the late lawmaker John J. Foley, who championed the county's public nursing home, told lawmakers that if the complex is sold, her father's name should be removed.

"If the sale goes through, it will be a sad day for our family," she said. "But it will be even a sadder day for the people of Suffolk County."

Opponents of the rail hub earlier in the day expressed concern that local government would have no way to regulate use of the property because federal rules pre-empt most local control.

Democratic Brookhaven Town board member Connie Kepert called on the lawmakers to table the sale until the county can work out covenants and restrictions, including limits on access to local roads. "We're asking you consider more than dollars and cents, and consider the residents of the community," Kepert said.

Andrew Kaufman, president of Brookhaven Rail Terminal, said, "We're hoping the legislators will be able to sift fact from fiction and come to an informed decision." Kaufman said the project is expected to create 300 jobs, already has produced $40 million in investment and will reap environmental benefits by reducing truck traffic on area highways.

Posted by Hamlet Reporter at 3:11 PM