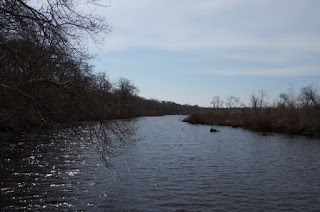 Recent sightings of herring and other fish in the Carmans River — the 10-mile-long estuary that runs from Middle Island to Great South Bay — are a sign that efforts to revive the imperiled waterway are paying off, officials say.

Schools of blueback herring and alewives have been spotted swimming upstream to spawn, thanks to improved fish passages built in recent years and the removal of dams that had blocked fish from moving north from the bay, officials said.

The payoff for Brookhaven Town officials came earlier this month when Anthony Graves, the town's chief environmental analyst, reported seeing large numbers of herring in the river near Montauk Highway in Brookhaven hamlet.

"We've done a lot of damage over the years to the river," Brookhaven Supervisor Edward P. Romaine said recently. "But left to its own devices, nature can heal itself."

Efforts to protect and rehabilitate the Carmans began in recent years after centuries of neglect.

Dams built along parts of the river almost 300 years ago to power grist mills had the unintended effect of disrupting spawning routes for native fish. The river also was lined with duck farms, campsites and houses that filled the river with untreated sewage runoff, causing high levels of nitrogen that cut off oxygen for wildlife.

The state Department of Transportation in 2008 installed a fish passage to replace a dam in the Sunrise Highway roadbed at Hards Lake in Southaven County Park in Brookhaven hamlet. Graves said herring have been seen since then as far north as the Long Island Expressway.

Town officials have announced plans to remove more dams. And federal authorities plan to build fish passages on Yaphank Creek, a tributary of the Carmans, later this year.

Walter Czekaj, a recreational fisherman from Islip who said he plies the waters of the Carmans several times a week, said he has noticed more fish in the river, as well as otters and osprey that feed on fish.

"There's more and more of them every year," Czekaj said one day recently as he prepared to spend a few hours fishing the river. "Now the fish can go and spawn there upstream without the dam there. . . . It helps everybody."

The state Department of Environmental Conservation stocks the river with rainbow and brown trout, supplementing the river's supply of native brook trout.

Larger numbers of fish are among the factors that have brought back birds such as osprey and bald eagles that all but disappeared from Long Island because of environmental degradation 50 years ago, officials said.

Federal officials plan to restore 283 acres of tidal marshes at the mouth of the Carmans in Wertheim National Wildlife Refuge, a former estate in Shirley.

Ditches were dug in the 1940s in an unsuccessful attempt to stem flooding, refuge manager Michelle Potter said, adding that such systems only managed to serve as breeding grounds for insects.

"It shouldn't have been a mosquito factory," she said.

The Carmans River comes back

Running for 10 miles through the town of Brookhaven, the Carmans had long been degraded environmentally. But through a number of key efforts such as improved fish passages and removal of old dams, fish such as herring are returning in great numbers.

Named for a 19th century resident named Samuel Carman, the river is fresh water for most of its length before it enters the tidal waters of the Great South Bay. It passes through Southaven County Park and is bordered by the Wertheim National Wildlife Refuge.

Posted by Hamlet Reporter at 9:02 AM