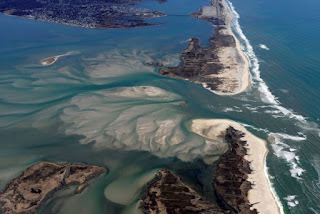 The breach caused by superstorm Sandy at the eastern end of Fire Island has changed water conditions in the area,

and may have exposed a shipwreck. March 16, 2016 Photo Credit: Doug Kuntz

The breach that cut through Fire Island during superstorm Sandy is yielding new treasures, giving scientists the chance to study changes in the barrier island and examine how oysters respond in the Great South Bay.

It also may have helped reveal a shipwreck from 1821 lost to the sand and tides despite searches over the years.

When Sandy struck in 2012, the storm cut through Fire Island in three places. Two breaches were closed and a third was left open because it was in a wilderness area of Fire Island National Seashore.

The National Park Service opted to keep the cut there but said it would monitor the breach and change course if it became a threat to the South Shore.

More than three years later, the breach is about as wide as five football fields. Broad shoaling — ridge-like formations of sand, some below surface and some not — has occurred on the bay side, and a channel through which much of the water flows has narrowed from previous surveys.

"These things change month to month or even faster," said Charles Flagg, a professor at Stony Brook University's School of Marine and Atmospheric Sciences, who is studying the breach. "It doesn't seem to be getting bigger overall. [But] it's always going to be doing something."

The breach's edges move around depending on wind and waves, but it has remained relatively stable, with sand accumulating in the late spring and summer and then eroding in the next two seasons as nor'easters come and go.

The water movement also is forming a sand flood plain on the bay side just to the north of the cut, limiting the amount of water that moves between the Atlantic Ocean and Great South Bay, Flagg said.

Swimming or boating in the breach is prohibited. Seashore Park Ranger Elizabeth Rogers said "the area north of the breach is dangerous to navigate," but there have been no major incidents.

Widespread flooding in South Shore communities — an early concern about the breach as far away as Lindenhurst — has not occurred. Salinity inside the bay near Bellport, which is across from the inlet, has increased a bit. High tide there comes about 20 minutes earlier, and environmentalists say the water near the cut is clearer than before Sandy. A bloom of brown tide in that area was less intense and shorter than in other parts of the bay because of the continuous flushing of water that the breach allows, according to an annual report Flagg wrote and released last week.

Tide gauges show that the overall difference between low and high ties in Lindenhurst is about 1.5 inches but tide times have not been affected, the report said.

Study of what to do with breach

The National Park Service is undertaking a study of what to do with the breach and this summer should release a draft environmental report evaluating options, Rogers said.

They include: keep the breach open and natural; leave the breach open, but have options to close it should it become a danger; stabilize and create a new inlet; or close the breach. As part of that study, the Park Service asked people to comment on the options.

Of the 366 commenters, 42 percent want the breach to be left open and managed, 20 percent oppose closure, 12 percent favor creating a stable inlet and nearly 9 percent want it closed, according to a report released last month.

Though the inlet represents a route for less than 10 percent of the total water moving in and out of the Great South Bay, fishermen and others who use the bay say water quality has improved in an area that once was a haven for shellfish before overfishing and polluted waters led to declining oyster and clam stocks.

The breach offers a chance to reclaim some of the bay for oyster populations, said Thomas V. Schultz, a co-chair of Friends of Bellport Bay, founded after Sandy to provide residents with updates on the breach, get public officials to tackle nitrogen pollution problems and return oysters to the water.

The group, in conjunction with Cornell Cooperative Extension of Suffolk County and the Town of Brookhaven, seeded 100,000 baby and older oysters last summer in an area around Ridge Island, which is in the bay and just west of the breach. The group obtained permission for the seeding from the Park Service and the town, which both prohibit shellfishing there.

Oysters — beyond their historical significance in the area — can filter 50 gallons of water per day, taking in the nitrogen and then dropping it on the sea floor to feed other sea life. "The bays are being polluted by nitrogen runoff," Schultz said. "The great thing about oysters is they love nitrogen — they feed on nitrogen."

The group hopes to plant a million oysters within five years. Recently, Schultz took a boat to the site and said the oysters were established and growing.

The hope is they will flourish because of the ideal conditions — cleaner water because of the water exchange allowed by the breach, a lack of harvesting and protections created by the flood delta formed in response to the breach, said Gregg Rivara, a aquaculture specialist with the cooperative extension

"The delta acts like a thick sandbar and really cuts down on the wave action," Rivara said.

Friends of Bellport Bay want the breach to remain open. "We believe that the inlet is very important to the survival of the oyster colony," Schultz said.

The breach and Sandy also helped uncover some of Fire Island's past.

Walking along the western part of Fire Island near the breach last spring, Schultz came upon a long oak plank, with metal shanks spaced about every four feet. He also found a wooden attachment used to thread rigging ropes on sailboats.

A history buff, Schultz believes the pieces are from the S.S. Savannah, which foundered and came apart near the spot in November 1821.

The Savannah was the first steam-powered ship to cross the Atlantic and did so with great fanfare, as it was fitted with both steam power and sail rigging. Ultimately, the ship was too expensive to operate and the owners removed the steam power, converting it into a cargo ship. On its last journey it was said to be hauling cotton.

The ship hit a sandbar around 3 a.m. during a bad storm on a night without stars visible in the sky, said Wendy Melton, the curator of exhibits and education at the Ships of the Seas Maritime Museum in Savannah, Georgia, which has a model of the ship that was built there. Stuck on a sandbar and battered by waves, it took a week before the ship sprung a leak, but the pounding took its toll. "The waves came in," Melton said. "It was pulling the sand away from her and she was sinking deeper and deeper."

Some of the cargo and parts of the boat were salvaged, but the hull and other parts were left behind. An exact location was never marked down and enthusiasts, the government and others have searched for the ship over the years, dating to the late 1950s, according to "Claimed by the Sea: Long Island Shipwrecks" by Locust Valley resident Adam M. Grohman, published in 2008.

Melton said finding it would be "astonishing," but most searches have focused on the water, not dunes.

Schultz reported the find to the Park Service, which asked researchers from The College of William & Mary to take a look as they worked on a separate research project on the island. They took pictures and GPS coordinates, said Chris Olijnyk, cultural resources manager for Fire Island National Seashore.

For the time being, the pieces are considered wreck fragments and staying where they are. Much of the structure is buried under sand covered in dune growth. Visitors are prohibited from removing or disturbing artifacts, Rogers said.

"It's in a federal wilderness area," he said. "It's stable. It's not going to move."

Survey work of any kind involving mechanical equipment would require a special variance because the find is in a protected wilderness area. If the seashore decides to close the breach, an archaeological survey would have to take place.

"It could be the Savannah," Olijnyk said. "The Savannah wrecked in that general area, but so did dozens of others. The list is extensive."

Schultz said he hopes additional testing or research can help determine whether the pieces are the Savannah.

"Mother Nature is acting like an archaeologist right now, exposing and uncovering things," Schultz said. "I think there is a chance this could be a major archaeological find." 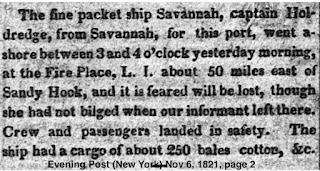 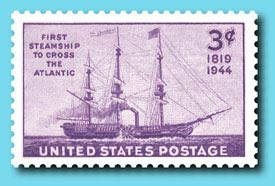 Posted by Hamlet Reporter at 12:03 PM