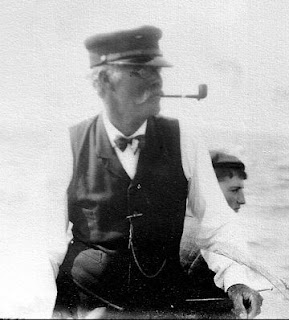 Walter Czekaj, a recreational fisherman from Islip who said he plies the waters of the Carmans several times a week, said he has noticed more fish in the river, as well as otters and osprey that feed on fish.

The otter had become extinct on Long Island, according to a report published in 1842.

However, otters had begun to be reappear on the island near the end of the nineteenth century, with single specimens being killed at Yaphank, Calverton, Brookhaven, and Patchogue in the period between 1875 and 1901.

Arthur H. Helme wrote an article entitled "Notes on the Mammals of Long Island, New York," for the Abstract of the Proceedings of the Linnaean Society of New York for the Year Ending March 11, 1902, p. 19.  (This particular article was revised July 15, 1902.)

. . . There is in the collection of the Long Island Historical Society a fine mounted specimen, presented by the late William J. Weeks of Yaphank.  It was killed by George Albin . . . There was a specimen taken near Yaphank, somewhere about the year 1875, and possibly this may be the specimen now owned by the society.
Mr. A. B. Gerard of Brook Haven, Long Island, kindly writes me, "The last Otter killed in this section was in Carmans River by Edward Bartran [sic, it should be Edward Barteau] station agent at Brook Haven in 1898.  The one before that by George Albin of Bayshore and sold to Wm. J. Weeks of Yaphank and presented by Mr. Weeks to the Long Island Historical Society."

It's no wonder the otter had a difficult time re-establishing itself on Long Island if, on seeing one, the first impulse was to kill it and present it to the historical society.

Mr. A. B. Gerard was Captain Abither Bell Gerard.  He ran a ferry, a large sloop called the Fanny Fern, that went between Squassux Landing and the Smith Point Hotel.  Alfred Nelson says ". . . Captain Gerard was rather natty.  He had a blue coat with brass buttons and a captain's hat . . ."  He married four times.

Between 1875 and 1969, eight otters were trapped or shot on Long Island, and according to Peconic Baykeeper, there were only a handful of sightings between 1920 and 1957.  They were on the Peconic River, Shelter Island, and at Lake Montauk.  It was believed that these were single individuals that had somehow made it over to Long Island from Connecticut.

By 2008 however, otters were again breeding on Long Island and were sometimes spotted in rivers and ponds along the north shore from Oyster Bay to Greenport and also in East Hampton.

Posted by Hamlet Reporter at 9:50 AM